I leaned against the door, scraping the blade of a pocketknife beneath my thumbnail to dislodge a wedge of dirt. “This is just a bit of routine questioning, Mr. Wyle.” The room smelled of stale sweat.

“I don’t think that’s necessary.” Wyle wore a nubby tweed jacket over a button-down shirt, steel-framed eyeglasses. He looked like someone who’d gotten into the habit of assuming he was the smartest person in the room. “Can I smoke?”

Miller slapped a photograph onto the scarred tabletop. “Sure. You ain’t under arrest.” He swung a wooden chair around and straddled it. “What do you think about that there girl in the picture, Wyle?”

Wyle blew smoke toward the ceiling. “I think she looks like a nice girl.”

“She was a nice girl, until some sick fuck killed her.”

Miller twisted the cap off a tin of chew. “You recognize her?”

Miller lifted Wyle out of his chair with an uppercut beneath the chin that tossed the smaller man halfway across the room. I stayed leaned up against the door, moving one foot to step on Wyle’s dropped cigarette. All of a sudden, Wyle had a lawyer.

The lawyer came down to the station, demanding to speak to whoever was in charge and throwing around words like lawsuit and harassment.

The Captain pulled us both into his office and told us off. He looked at me. “Keep Miller on his leash from now on, you hear?”

I took a swig of beer. “He’s fucking with us, Miller. Wyle’s a wannabe, a time-waster. Being an asshole doesn’t make him a killer.” A shit-faced blond was making out with some dork who looked like an accountant on the dance floor.

“Knocked that snide look off his face for a minute, didn’t I?”

“She took the kids to her mother’s. Says I’m a workaholic. And that I have a temper. She says a lot of things.” He drained his mug. “Shit Boyd, I don’t want to be one of them losers only sees his kids on weekends and school holidays.”

A brunette with blue eyeshadow and a sassy dress slid onto the next barstool. She said to Miller, “I like vodka.”

He waggled his ring hand at her. He said to the bartender, “Add hers to my tab.”

The brunette and her drink drifted away. Miller tossed a peanut into his mouth. “How’d you do at the races Saturday?”

I dug in my pocket for a quarter for the jukebox. “He’s alibied.”

“We won’t break that shit. And Captain Dahl ain’t gonna let us haul Wyle in again ‘til we got the goods. That little turd Wyle thinks he’s slick.”

Miller strode into the precinct. I read his intent in the set of his shoulders and the color staining his cheekbones. I stood. He put one big hand on my left arm and the other around the back of my neck and manhandled me through the station doors. He tossed me into the parking lot. I collided with the bumper of a squad car.

The viney arms of wild honeysuckle climbed the rear fence. A quarter-mile to the east, a freight train carrying corn and soybeans clattered along steel tracks. The dark lenses of Miller’s sunglasses reflected back the thrust of my chin, the defiant angle of my mouth. He spat a stream of chew. “What do you gotta say for yourself, Boyd?”

“I say: If you and I were better cops I wouldn’t have had to do it.”

He wound up a haymaker I didn’t bother to dodge. I figured he owed me one. I licked my split lip, tasted copper. Wiped my mouth with the back of my hand and flung drops of blood onto the gravel. The gallop of the train fell into a canter and faded to a two-beat trot: clop-clop, clop-clop.

Miller paced a tight circle, hands gripping the top of his head like he was trying to keep the thoughts from floating out. “Boyd, you put shit in motion you got about as much chance of controlling as you would standing on them tracks to stop that there train. The hell got into you?”

My left eyelid twitched. “Are you asking me why? Sally Monroe and Brenda Janowski and Rosemary Black. That’s why.” My voice caught and I untangled it with effort. “You going to tell Dahl?”

“Goddamn you, Boyd.” He strode back toward the station, kicking a stone out of his path. It bounced off the rim of a parked cruiser. He turned back when he reached the door. “Hell no, I ain’t.”

I rarely think of the day I first saw Wyle. Or of the exact moment I realized he was the one but that we’d never get him for it. I don’t think of Miller quitting the force six months after Wyle’s trial.

What I think of are the movie posters taped to the walls of Brenda Janowski’s pink bedroom; of Sally Monroe’s little brother sitting on the front step, waiting for her to come home. I think of Rosemary Black’s mother, Dee, pressing individual photographs into my hands. This is Rosie when she was in kindergarten. Oh, this one was taken up north, at the state park. She always loved Halloween; here she is in her vampire costume—that was 1980. This is her with her cat, Whiskers. Here she is as a baby.

Dee Black dies. Captain Dahl does, too. Miller dies in hospice, of pancreatic cancer, surrounded by a second wife and three sons and a bunch of grandkids. Only Wyle lives on.

A few weeks after I read about Wyle’s death online, I’m on my way to the courthouse to meet a friend for lunch. Warning alarms clang and flash at the light rail station. The crosswalk signal blinks and I’m swept along a narrow river of pedestrians; people in business suits and teenagers with ear buds and joggers in expensive sneakers. My eyes skim over the window of a bookstore, where glossy magazines and various newspapers are displayed. A headline drags my eyes back. New information revealed in decades-old murder case, weeks after convicted man dies in prison.

My heart kicks up like hooves at the racetrack after the starter throws open the gates. Somebody else has confessed. Or newly discovered DNA evidence exonerates him.

I push into the chilled hum of air conditioning, drop a bill on the counter. I slide the folded newspaper under one arm and make myself walk eight blocks without looking at it.

Sitting on a stone bench in the courtyard of the courthouse, with the sound of men issuing instructions into cell phones and women’s high heels tap-tapping along the brick walkway and songbirds twittering from tree branches, I unfold the paper across my knees.

Woman key to The Northgate Woods Killer’s 1987 defense has recanted her testimony. Viola Manfred, 67, who provided accused serial killer Edwin Wyle with an alibi for two murders committed in the mid-1980s, told this reporter (at Manfred’s home in Silver Bay on Friday) she lied to investigators in 1986 and under oath on the witness stand during Wyle’s sensational 1987 trial for the murder of sixteen-year-old Rosemary Black.

“I was in love with him and I knew he never killed those girls,” Manfred said last week. “I wanted to help him so I lied.” She said she wanted to confess, now that Wyle is deceased. Wyle died in prison nearly two months ago of a heart attack, at age 69. The two had maintained a friendship during Wyle’s incarceration. When asked if she was concerned authorities might charge her with accessory to murder, Viola Manfred said, “Let them. I got a tumor growing in my liver and eight weeks to live.”

Despite Manfred’s 1987 testimony, Wyle was convicted and sentenced to life in prison for the murder of Rosemary Black. The case hinged on evidence found in his East Bryerly home in 1986…

“Boyd,” says a voice. I look up, staring blankly into the face of a man near my own age. I clear my throat. I stand. “Hey, Ted.”

“You okay there, buddy? You look like you just saw a ghost.”

I slap my friend on the shoulder. I leave the newspaper lying on the bench. “Nope. No ghosts. Not anymore.” 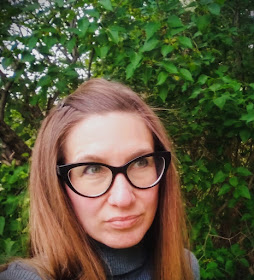 Jessica Hwang lives in Minnesota with her husband and dogs. You can find her fiction in Uncharted and Moss Puppy. Her short story A Place like You was a finalist for the Bellingham Review’s Tobias Wolff Award for Fiction in 2022.
Rusty Barnes at 10:56 AM
Share