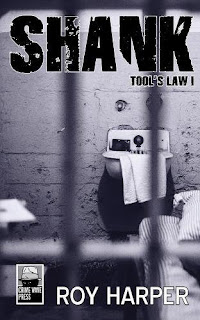 In Shank, Harper’s narrator David “Tool” Roney is serving a life sentence at Parchman Farm, the oldest and only maximum security prison in Mississippi. Though Shank details the daily life inside a prison walls, Harper shines when writes about a convict’s existence and their fight for dignity:

Prison was about much more than just not being allowed to come and go. It was about sensory deprivation. Deprivation of life’s normalcy. You were deprived of all kinds of stimulation – colors, aromas, sounds, movement, family and love – all variety of life was replaced by something bland, offensive, and negative. Everyone wore the same clothes and the same hairstyle. Everything was painted the same bland, uninteresting color. Everyone was a potential enemy. Your life became permeated with the odors of unwashed bodies, urine, feces, and insanity. Steel doors slammed and people were always screaming; angry, stupid or insane screaming. Everything moved slowly and any sudden move caught your eye; was it an act of violence? Or was it just a rat?

Stuck in the Maximum Security Unit, Roney is always on alert against the daily humiliations forced upon him by both guards and inmates. These indignities drive his one ambition — to escape. Roney finds himself a partner in making his escape plans, a man who Roney knows to be “loudmouthed and rude, with an overbearing personality, abrasive to most people’s nerves, Mad Man was a man who was hard to like.” But what attracted Roney to him most was that Mad Man was an outlaw.

I didn’t particularly like Mad Man, myself, and would never even have talked to the man if it hadn’t been for the one thing that drew me to him: Most inmates who spoke of escape fantasize about living in the woods or blending into a large city somewhere and maybe getting a job. Not Mad Man. He wanted to escape so he could rob more banks, do drugs, sell drugs, enjoy party girls, and live like a biker till someone killed him. Yep, Mad Man Rigsby was a one-hundred percent true, no excuses made, no apologies offered, outlaw.

Unlike heist novels where the plan goes haywire and usually fails, Shank is prison escape novels, the plan always falters, but somehow the escape always succeeds. Harper clean and crisp writing excels at building the tension throughout the escape and does not falter as Roney continues to evade the dogs and police tracking him down.


Usually we don’t assume that a crime writer is a pick-pocket, robber, murderer or, say, prisoner, but in this case, assume away. Harper is currently a prisoner at Parchman Farm where is his serving 88 years for robbery as a repeat offender. Left with the knowledge that his only way out of prison is escape or death, Harper has escaped from prison three times. One escape was featured on an episode from National Geographic’s Breakout series, “Escape from Supermax”. Even though there is an authenticity to the bleak dreams and bitter realities of Shank, the book succeeds on Harper’s direct and no-nonsense writing.
Posted by Rusty Barnes at 6:28 PM