My Darkest Prayer, by S.A Cosby, reviewed by Rusty Barnes 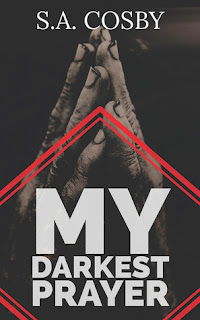 
S.A. Cosby's My Darkest Prayer is a solidly-written and compelling journey into the backroads and sin joints of Virginia. Our guide on this journey is Nathan Waymaker, a funeral home assistant.


Waymaker is a man between worlds, middle-class and biracial, in a rural county, he's developed a reputation as someone who can do certain things for you. A former Marine and sheriff's deputy, he's been forced to the wayside of his small-town life, because of the  department's failure to investigate the tragic deaths of his parents, a failure he blames on both race and class.. When a couple of nice church ladies hire him to look into the death of Reverend Esau Watkins, Waymaker gets embroiled in corruption that eventually encompasses the department he's left behind, as well as other members of the small community.


Cosby paints deft portraits of all the characters, providing tragic backstory and mordant humor in equal parts. Waymaker's is a compelling point of view; he's quick-witted and quick-fisted, but always in service to the right. Cosby excels at and revels in the small-town atmosphere. Everyone knows everyone else's business and no one is immune to the social politics of the situations they find themselves in.


The two old women sitting across from me were studies in dignity. They held their gray heads up high. I didn't want to burst their bubble, but I didn't have a good heart. My heart had been shattered the day my parents died. Since I'd quit the sheriff department , I had done some odd jobs for some folks in the counties, earning a reputation as a man who could help you on the down low. Do things the cops couldn't or wouldn't do.


Waymaker reminds this reader of Spenser and Hawk combined,  a street-wise and occasionally brutal practitioner of fisticuffs and hard drinking in a world that welcomes neither.  Cosby provides an engaging love interest in the adult film actress Lisa Watkins, daughter of the murdered minister. She's a woman blowing through town like a whirlwind to do her duty and no more, as she and her daddy did not, as they say, get along. The often funny nuances of Waymaker's relationship with Watkins serve only to complicate his life, as she gets drawn into the novel's main action despite Waymaker's best efforts.


“But you went out and bought him some clothes?” I asked. Lisa sucked at her teeth. Her right foot was tapping out a staccato rhythm.


“I didn't want to go up to the house. So I just bought some stuff. Is that gonna be okay?” she asked.


“You funny,” she said. A few seconds passed. The silence didn't seem awkward. It felt expectant. I forced myself not to stare at her body but gazing into her eyes was just as dangerous. At last, she broke the spell. “So we good?” she asked.


If there's a fault in this book, it's that the locus,  a megachurch and its denizens, is a touch convenient. No one expects any less than hypocrisy from these people.  Nor do we expect more from the small town that depends on this church and ones like it for spiritual sustenance and social standing: it's the way the con works. But that's a small criticism in the face of a strong novel that builds on the mystery tradition of the detective sucked into a web of corruption and greed. One hopes this is only the beginning of impressive things from Cosby.
Posted by Rusty Barnes at 8:42 PM