Tommy wasn’t sure what irritated him more, the old guy’s oily confidence, or the direction their conversation was taking.

"I’m talking about the joy of killing," said Marv with the hairy eyebrows and expensive black jacket. “Surely you’ve imagined it more than once.”

Tommy tried to laugh, glanced around the coffee shop to see if anybody had overheard.

"It’s the ultimate rush," said Marv. "Taking another person's life away from them."

Tommy tried to laugh it off.

"Look, you said on the phone this was a business opportunity. A way to make some good money. Like one of them pyramid deals.”

"Nothing I'm telling you about today is against the law."

"Dude,” said Tommy. “Killing people is against the law."

"Not if they don't remember it later,” Marv said, all sorta snotty-like.

"Here’s the thing,” said Tommy. “I been. . . away for a while. Now that I’m back, starting over again, I need something legit."

He thought about the friends he’d left behind.

Louie the Snake. Big Dale. Sammy Lamb. Somewhere, they were all snickering at him.

It was to laugh.

"We all got needs,” said Marv. “Me? I need another cup of coffee," Marv picked up his empty paper cup, careful to keep hold of the knobby cardboard sleeve.

“Maybe this job ain’t for me.”

"Run up to the counter and get me a refill,” said Marv. “You do, and I promise you won’t regret it.”

Marv held out the cup. “I take it black.”

Tommy stood up, awkwardly pushing the chair back from the table as his knees straightened, making a loud scraping sound against the coffee shop floor.

“Okay. Okay, I’ll listen. But I’m not promising anything.”

A lady at the corner table, earbuds in and typing on a portable, looked up with annoyance. She wrinkled her nose.

Tommy shot her his best hard look and moved to the polished walnut and chrome counter, pushing past a skinny geek wearing a bike helmet.

Man, he wanted to explode.

He'd been on a dozen job interviews in less than a month.

Now this prick, Marv, with the expensive jacket and gorilla eyebrows was promising big money, but all it was going to do was lead Tommy right back to the slam.

He could feel it. Something about the guy wasn’t right.

He closed his eyes, felt sweat roll from under his arms, down his sides. His short sleeve cotton shirt, doing its job to conceal the 9mm he carried inside his waistband, wasn't tucked in. His khaki shorts hung loose at his knees.

He asked for Marv’s refill, took in the smell of warm bagels, the sweet scents of Italian syrups.

Maybe he should tell the old guy where to get off and apply for a job here?

He tried to imagine himself wearing the goofy, milk-stained apron, sucking up to pretty boys who dressed in ties and tasseled loafers and liked whipped cream on their drinks.

He glanced over his shoulder at the back of Marv's balding head, just visible over the half-wall between them.

Two laughing girls walked through the shop's door: hair, teeth, jewelry all sparkling in the sun.

Tommy sighed and carried the coffee back to Marv's table.

Then Marv surprised him.

Crazy old Marv with the gorilla eyebrows reached out—like he'd done it a hundred times before—brushed aside Tommy's shirt and pulled the Nine from Tommy’s waistband.

Before Tommy could move, Marv stood up, casually turned around, and blasted the lady in the corner right through the earbuds. A side step, and Marv's next shot cracked apart the geeky biker's helmet, sending gooey shards of skull across the serving counter.

Each of the girls, laughing-no-more, managed a single scream before Marv emptied the clip into them.

With the shop's patrons twitching at his feet, Marv smiled and sat back down.

For a split-second, Tommy felt like puking. Then he realized he still held Marv’s cup.

He let it go and watched the steaming contents splatter across the floor.

Marv tossed the gun to the table where it landed with a metallic thud.

Then everything melted into a green haze and there was a rushing sound, like water through Tommy’s ears, washing away the ringing echo of gunfire.

He closed his eyes.

When he opened them, everything was the way it had been before the shooting.

The lady in the corner adjusted an earbud as she typed on her portable computer.

At the counter the geek paid for his drink, then nodded at the two laughing girls.

The gun was back in Tommy’s waistband.

Marv’s coffee cup was full and steaming on the table.

Tommy caught the back of his own chair as his knees gave out.

One side of the colorful ad showed stock photos of smiling people. Bold fonts posed a series of questions.

Sick of your boss?

Had enough of your spouse?

Tommy kept talking about the print job, but his attention was on the ephemeral square of lightly glowing, nearly transparent film hovering over the surface of the paper.

"Hold it between your fingers," said Marv, and Tommy peeled the square up, away from the brochure.

"Squeeze it once," Marv said, “and you open an alternate future timeline around yourself. Like a bubble between the seconds. While you're there, you can do anything you want. Without anyone knowing. Without any consequences."

"I opened an alternate timeline just now. You saw it. In that future, now past, I enjoyed killing everyone in this shop. Then I gave the film a second squeeze and it closed that future down in favor of the prime reality."

"So it never happened?"

"Oh it happened. But then I closed the switch and it didn't happen."

"And nobody remembers it?"

"Nobody but you and me. I made a call while you were up getting coffee and our techs made an allowance just for the sake of demonstration. Normally it's a solo experience."

Tommy sat back in his chair, trying to take everything in at once.

"I honestly can't believe it's possible."

"So you sell these? These switches? So that people can live out their fantasies?"

"Violent fantasies," said Marv. "Something about the matrix responds best to the most violent emotions."

"And nobody's the wiser. Best of all, the victim doesn't remember. Unless of course, you want them to."

“Back inside?” Marv shook his head. “There’s no punishment for something that never happened.”

Marv's left hand covered his mouth, moved down red cheeks to stroke his fleshy chin. "You understand the basics of an MLM?"

"Multi-level marketing. Yeah, like Shopway or that cosmetics company." Marv nodded. "Imagine the market for what we’re talking about. In this day and age? With all the anger and rage fomented by social media? I’ll bet you have a few friends that would jump at a chance like this?"

“Some righteous anger fermenting there,” he said aloud.

Tommy looked over his shoulder at the lady in the corner.

This time she met his gaze with an outright sneer.

“A guy could make a killing,” he said.

Then he pulled the gun back out of his waistband.

He put his finger on the trigger.

"Before we talk business, you mind if I give it a try?"

Marv held up the green film and gave it a squeeze. 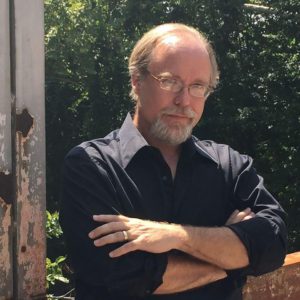 After growing up on a Nebraska farm, Richard Prosch worked as a professional writer and artist in Wyoming and South Carolina. Answer Death was the first novel in his acclaimed Dan Spalding mystery-thriller series, and Richard has since added three sequels. He lives in Missouri with his family. Visit him--and Dan Spalding--online at RichardProsch.com.
Posted by Rusty Barnes at 8:17 PM