A knot in Skid’s chest. Blood on the floor. One spent shell falls from his gun and Vaughn, Skid’s cousin, his best damned friend, stares up at him. One eye a pulpy exit wound. The other frozen in surprise.

“What’s going on in there, Henry?”

A boy cowers in the corner. Just a kid. He stares at the woman he walked in with. Dead now like the rest. All but the two of them.

“I want a truck,” Skid murmurs.

“What were the shots we just heard, Henry?” The voice reminds Skid of his Uncle Simon. “Everyone okay?”

“Stop calling me that,” Skid says. “Nobody calls me that. Just get me a truck. Or a van. A fucking way out of here.”

The voice asks for a hostage. An exchange.

“Transportation might take a while,” it says. “Anyone in there need anything else in the meantime?”

Skid looks around at all the bodies.

That cocktail Vaughn cooked up. . . those two thick sky-blue lines. That’s why he went all ate up. Why they’re here now, half dead and trapped. But what Skid would give for just one more bump.

Drive on, he tells himself. Go through with it. Set up all those card decks of C4 along the deposit boxes and at least nab what they’d came for. Just in case he makes it out. Somehow.

The weight aching him settles in his eyelids. He wonders about things Vaughn missed. About unknown doors. Tunnels and secret passages. Like bookshelves that spin. Places to hide. A flashlight through the flesh of his fingers. Dark closets. The dark. Heavy hands on his chest, and the way his uncle would—

He rips the phone cords from the wall.

The boy still sits in the corner, chin between his knees. Shallow, sharp breaths. Eyes wide. Panicked and afraid.

Then, a muffled rattle. Somewhere not far outside. So out of place. It shakes something loose in Skid. Before the burst even ends, he recognizes it:


Two exits. One leading west to the parking lot. The other downstairs, spilling eastward onto Main Street. Skid follows the gunshots to the west. A long, wood-paneled hallway. Double panels of shatterproof glass.

Knots unravel in his back. The one in his gut doesn’t.

All the armored cars, gone. The cops littering the sidewalks, gone. The lot past the entryway, now vacant. Just a hot slab of concrete stretching toward a scattered hillside of rundown houses.

Not from outside, but within.


An empty corner. The lobby, quiet. Air still thick with copper and gunpowder. The kid isn’t there.

And neither is Vaughn’s body.


Skid finds the kid in a back office. Balled up under a desk. A black burn mark on his forearm, the shape of a hand.

“What happened?” he asks.

A long moment of silence. The kid won’t talk. The rattle of the AC. Then, nothing. The lights die along with the electric hum.

Too quick for Skid to avoid, the kid snatches Skid’s wrist.

Shame melts the kid’s pale face. Like he did something wrong.

Skid tries to explain. “I don’t like being—” But a voice cuts him off. It comes from the other entrance downstairs.

It’s familiar. Unmistakable. But it can’t be.


Skid can’t believe it. Won’t. Vaughn’s cocktail. That’s all this is. But he can tell from the look in the kid’s eyes beside him that he sees her too.

She stands in the middle of the street. Tight, ripped jeans. A low-cut top. Clothes too young for her age. The age she seems. A bullhorn in her hand held to her bright red lips. “Henry?” she says, and she smiles.

He pulls a trophy case away from the hallway wall.

His head’s fucking with him. He could’ve sworn there were more buildings beyond the street before. Now it’s mostly empty land. Just a handful of structures. Barely noon, but getting darker.

“Let us in, sweetie,” the woman outside says. “Let them have a hostage and they’ll let you go.”

Filled with banking awards and old photos, the case topples. All the items inside fall through the glass, shattering and scattering across the linoleum. He shoves the wooden structure toward the entrance.

An eruption. A crunching boom. He looks up, and his mother is just beyond the doorway. The glass is splintered where the palm of her hand bloodies against it. Red trickles along the cracks. Track marks oozing pink pepper the bruises in the nook of her elbow. “Listen to your Momma, you little shithead.”

One last push. The trophy case blocks out the daylight. The hall goes dark.

Red in the exit sign’s light, the kid stands at the foot of the stairs.


It’s a room of pipes. One looks about the width of Skid’s shoulders.

Blow through, Skid thinks. He could follow it through the drainage system.

The creek was only a half-mile away.

He could get stuck. Trapped. He could suffocate.

But maybe he’d rather die in a sewer than live in a cell.

Skid slings the bag of C4 onto his back and heads toward the steps.

Skid finds it under a stack of paperwork along the teller counter.

“Your bus is here, Henry,” the voice says. The voice that sounds like Uncle Simon.

“Best we could do. Just give us the kid and it’s all yours.”

“How do—who says I ain’t giving you some other hostage in here?”

Skid’s eyes trace the wire coming out of the phone down to the frayed end at his feet. “I—I say who goes.”

“The kid, Henry.” That voice. So clear, so close. Skid can feel on his neck its beer-sticky breath. “Simon says.”


A few strides from the western entrance is a yellow bus.

Beyond it: only rough, rolling hills.

A desert at dusk.

Skid shakes his head. Where did the buildings go? The town? Confusion makes him want to collapse. Give up before even taking a single step. Quit being such a pussy, Henry.

The kid says nothing as the barrel meets his temple.

Quiet settles over Skid like a wet, wool blanket.

In the time it takes to reach blacktop, the sunlight dies until beyond the lot’s nothing but night. Just a vague line of the horizon splitting two warring depths of black.

They near the bus. A murmur rises. Tinny and distant.

Skid enters first, walking the kid backward until they’re both inside. That strange sound detonates. It comes alive in complete clarity. Dozens of children. Maybe hundreds. Laughing. Screaming. Speaking in a language Skid doesn’t want to recognize, but does.


Three small, staggering steps up into the bus.

The horde of children turn toward Skid with blank, cloudy eyes that seem impossibly white against their black, charred skin.

A choked sob. It reminds Skid he isn’t breathing.

The patter of footfalls behind him makes him turn. He catches the last glimpse of the kid before he disappears back into the building.

Something tugs at his flak jacket.

Through the windows: shifts in the darkness. A deep shadow buries the edge of the lot. Like black sand pushed by the wind one gust at a time. Swallowing the world. All of it except the street leading out of town. Skid notices a key in the bus ignition.

Someone says, “A hostage for a way out.”

Skid glances over his shoulder. Where the charred girl just was sits Vaughn. Thirteen years old now. A bloody crater in his face. “I saved you, Skid.”

“You know that’s not what I mean. Why shoot me after all I done for you?”

“You ain’t that kid no more, Vaughn.”

“Neither are you.” He nods to Skid’s forearm. Where the kid grabbed him earlier. A black hand mark taints the skin.

Skid looks back at the lot exit. Narrow eyes. Cupped hands at his temples. He leans toward the windshield, and his breath leaves frost on the glass. He can’t tell where the road might end. He asks Vaughn, “What’s the first thing you remember?”

Vaughn seems to think as the wind outside picks up. Black sand pelts the driver-side of the bus.

“Smoke,” he finally answers. “Way it looks against a clear sky.”

“Proves you know what I already know about you.”

“Never told you that.”

“You did.” Skid takes a step down toward the bus door. “Was probably just too fucked up to remember.”

Skid risks one last look back toward the bus. He expects to find Vaugn’s smug, grinning face behind him. But only the little burnt girl is there.


Skid guides the kid into the vault. Back with all the locked deposit boxes. Out at the lot and at the bottom entrance, heavy blows bash against the doorways.

“Nobody can get to you in here,” Skid says, and his voice cracks. “Nobody.”

The metal door closes with a gut-quaking thud.

Above, skylights break. Glass falls to the tile and on top of the bodies. Faint light from the front hallway flickers with approaching shadows. Skid clutches his .40 tighter. With it, he smashes the keypad on the wall beside the vault.

A warped chill stabs Skid between his shoulder blades. He turns to find him standing there over the smear of his son’s blood. Shoulders back. The big gut he always hauled around like a loaded wheelbarrow now spills intestines from a shotgun wound.

It’s weird, Skid realizes, being as tall as him.

Behind Uncle Simon, black sand takes over the walls, floors, and ceilings. Like blood through a glass of light beer. “Why you being such a pussy, Henry?” Uncle Simon says. “We just want the kid.”

“All this shit today,” Skid says, “made me remember something.”

The dark spreads thick. So deep and carried so easily by the whirlwind around them, it leaves just Skid, Uncle Simon, and the vault. Its speed rises to a solid blur. Like helicopter blades. Its noise implodes under its own weight.

Suddenly: No sound. No movement.

“Know what my first memory is?” Skid asks.

Uncle Simon steps toward Skid. “Don’t know that I care.”

“It’s a feeling,” Skid says. So close now. The smell of stale cigar smoke in the man’s clothes. Skid almost gags. “A feeling. Like being scared. Or being loved, I guess. But sharper. Deeper.” He drops the gun. “Harder to let go of.”

He stares into that face—a face he realizes now looks a lot like his own. He doesn’t let himself look away. Instead, he wraps his arms tight around those broad shoulders.

He triggers the detonator on the C4 strapped to his back, and that feeling returns. He’s felt it many times before, but never so strong or heavy or rooted in his core. Like a hand tugging at a ball of string in his chest, unraveling it into a loose mess at his feet.

He isn’t sure if he could’ve put words to it that first time he felt it. Maybe the words came later to describe something so overwhelming. But the words come now. Like always he hasn’t a clue what they really mean. What bond the words have to the real, waking world he’s known and survived in for so long.

He tries to say them. Tries to push them from his throat with breath he isn’t even sure he’s still got. He can’t. But they’re there. In his mind they’re loud. So loud they blot out everything like all that night sand.

Until they’re the only thing left in the bottomless, lonely dark.

I want to go home. 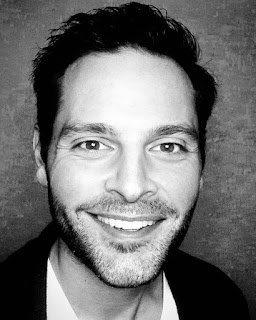 Dan J. Fiore has been published by Thuglit, Mystery Tribune, and Hot Metal Bridge, among others. His fiction won grand prize in both the 82nd annual Writer’s Digest Writing Competition and LitReactor’s Arrest Us Crime Writing Challenge, and his screenwriting was awarded a First Works Grant by Pittsburgh Filmmakers. He currently works as a creative strategist in Pittsburgh and teaches at Seton Hill University, where he also earned his MFA. For more, visit www.danjfiore.com.
Posted by Rusty Barnes at 1:11 PM