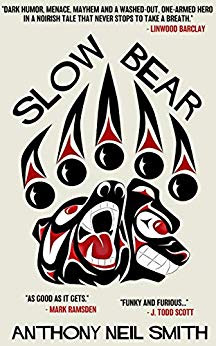 As a crime-fiction fan I’d heard of Smith, but never read any of his work. I’m glad I finally made the time. Smith’s writing style is tight and unpretentious. He has the delightful ability to fade into the background. Slow Bear becomes an experience you feel--more than words on a page.

Micah “Slow Bear” Cross, is a former reservation Police Officer in North Dakota, and was medically retired from the force. This is Smith’s description: “Slow Bear used to be a rez cop. He wasn’t good at it, not really, but he was good at being bad at it. The one time he tried to be good at it, he got his whole fucking left arm shot off by an ex-soldier over something that happened in a war Slow Bear didn’t know much about. That was a year ago.”

Smith doesn’t cover the referenced war’s specific conflict or theater. Slow Bear is detached from the rest of the world. Smith consistently presents characters in a way that is concrete, but allows the reader to fill in the blanks. Here is the portrayal of the casino’s bartender, Lady: “She was cute. She dyed her hair red then blue and sometimes it was just dark brown, like now, and one side of her head was shaved. Her glasses were thick and she tried to distract from them with too many earrings and a nose ring. Chubby cheeks, baby fat all over. Why not, Slow Bear? Why not?”

In the present Slow Bear hangs around the bar and works as a fixer for whomever is willing to pay. In reality, he spends most of his time chatting up Lady and sipping beer. However, Slow Bear isn’t a boozehound, he prefers heroin, but does his best to avoid chasing the dragon.

This passage is a good example of the tight writing style and Slow Bear’s heroin avoidance:

“I thought you didn’t drink coffee,” Lady said. She’d already gotten her pie. Slow Bear hadn’t noticed the guy bring it.
“I tried to give it up. But I need the caffeine.”
“Then why did you try—”
“Heroin. I gave it up because of heroin.”
Her eyes widened, her lips got tight. “You do heroin?”
A deep breath and sigh and fuck fuck fuck. “I used to. Once I lost my arm, they put me on some pretty lame pain pills, but I didn’t like them. I got OxyContin instead. I liked those. And next, someone offered heroin, and I tried it, and I really liked that. But shit, heroin, girl, that’s a lifestyle choice. That’s a commitment. So I kicked it cold-turkey twice. Three times. And that got me onto coffee, which was a much better replacement than I expected. So I was making six, seven pots of coffee a day. But then I ran out of money. Coffee is expensive.”
“So is heroin.”
“So is orange juice. But I like orange juice. I like coffee. I’ll just drink cheaper coffee.”
“It’s free at the casino.”
He grinned. “I’ll remember that. Is that pie good?”
“Shit yeah,” with her mouth full. She cut off a bite with the fork and handed it over.
He ate the bite and agreed, that was some good fucking pie.”

As the story progresses, Slow Bear becomes involved in a marital disagreement between a cheating wife, a boyfriend, and the husband. Soon three people are dead--one by Slow Bear’s hand. These deaths lead to a violent chain of events in which Slow Bear deals with reservation police, tribal leadership, oil-industry executives, government agents, and mafia power players. Eventually, Lady is kidnapped by sex-traffickers. A hefty dose of violence follows. Slow Bear fights hard, but doesn’t always win.

In a few places Smith’s academic background pokes through, most notably with a Don Quixote parallel. This did not come across as abrasive or pretentious, but it is fun for the aware reader.

Regarding less enjoyable aspects of the book, they were limited. I didn’t like that all cops were willing to break the law, even the “good” ones. Here is Smith discussing Trevor, the chief of police:

"Slow Bear smiled. Yeah, a downright honest smile for once. “Why the fuck would he believe something like that?” “Because that’s the truth.” Trevor grabbed Slow Bear’s beer bottle and slammed it onto Slow Beer’s forehead once, twice, three times before it shattered, and Slow Bear felt pulverized, then there was ringing in his ears and blood leaking into his eyes. He fell off the stool onto his bad shoulder and got his feet tangled in the stool legs, twisted his ankle and the damned stool fell on top of him. He shoved it out of the way. He’d bruised himself all over and was still blinking blood and glass away. That’s when Trevor kicked him in the gut.”

Overall this story is fast and engaging. This scene, where Lady and Slow Bear discuss spying, shows the pace well:

“Pretty stupid,” Lady said with her mouth full. “I dream of jobs like that.”
“He wasn’t offering dental.”
“Who cares? You could buy your own insurance with that kind of money. Can you imagine? It would be like, like, like writing for TV. You make it up. You tell the Hat about it once a week, and you’re done. Cha-ching.”
Cute. He grinned. “Let’s go home. If I’m quiet, if I behave, maybe Trevor will leave me alone. I really want to be left alone.”
“What did you do in the first place?”
“Let’s not go there.”

The book is non-commercial noir in the best way. The main characters are unlikeable (with the exception of Lady). The whole production is violent. The locations are hardscrabble and rural, but not the lush Southern rural that is popular. The drug use is unglamorous and redemption never comes. The story wraps up in a satisfying, but open-ended, manner. In the new decade let us all resolve to pay more attention to both novellas and Anthony Neil Smith. 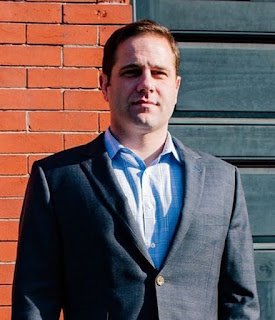 J.B. Stevens lives in the Southeastern United States with his wife and daughter. His writing has been featured in Mystery Tribune, Out of the Gutter, Close To The Bone, Thriller Magazine, Punk Noir Magazine, The Dead Mule School of Southern Literature, Criminal Element, and other publications.