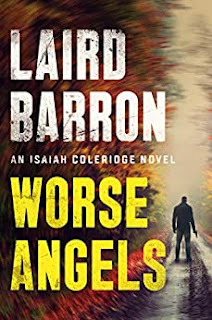 Here’s something real: Don’t buy the jive about violence as a last resort because I’m better than that. No. Violence is only a last resort when it’s a last resort. Realistically, it’s often a first, second, or middle resort. The Superflys of the world speak the language fluently. Besides, hitting a jerk feels good. It has to feel good, or else I wouldn’t be able to stomach it. That dopamine rush I’d gotten addicted to in the Outfit was difficult to kick, so I weaned myself slowly.

Crime and horror have been bedfellows since the beginning, when Edgar Allan Poe murdered a character in the Rue Morgue. Marketers split us apart for easier fleecing in the 20th century, but we had Charlie Huston, Elizabeth Hand, George C. Chesbro’s Mongo the Magnificent taking an abrupt dive into mad science with the infamous Beasts of Valhalla, and William Hjortsberg’s masterpiece of Faustian deviltry, Falling Angel (adapted into the film Angel Heart, but the book is even better).

A few years ago, cosmic horror maestro Laird Barron burst onto the crime scene with Blood Standard, the first Isaiah Coleridge novel, starring the half-Maori half-white hitman turned dirty-handed investigator in the blasted landscape of upstate New York. He followed that more traditional P.I. tale with the Pynchonesque government operator-serial killer story Black Mountain, and in the third and latest, Worse Angels, he takes us on a Lynchian dive into small-town corruption and modern blood cults that makes God is a Bullet seem like middle-class tourism in the underbelly.

The story is set plunk in the genre’s bailiwick. A young man working on a now-abandoned supercollider project run by two powerful local dynasties took a Peter Pan into the shaft four years ago, but his mother refuses to believe it was suicide. And her bad cop brother-in-law is off the force and wants to hurt the politician who betrayed him, so he hires Coleridge to dig into the covered-up death of his nephew, Sean Pruitt. As Coleridge explores the ruins of the project and the creepy town left in economic shambles with its closure, the bleak mountains and dark, enveloping forests of Horseheads, New York:

The town was named for the herd of sick and injured packhorses slaughtered upon General John Sullivan’s return from his triumphant campaign in the north against the Iroquois Nations in 1779. Natives lined the road with the skulls. Over two centuries later they referred to the area as the Valley of the Horses’ Heads.

A place where “Christianity and the old gods dance hip-to-hip during the witching season” will ring familiar to anyone who’s explored the towns of New England and come upon a pumpkin festival that locals pshaw-pshaw as old hat, but looks like the end of The Wicker Man to outsiders. But Coleridge runs into worse than ziggurats of jack-o’lanterns like glowing skulls on his investigation in Horseheads. The town is owned by the billionaire Redlick family, led by a Senator patriarch, with a creepy, marionette PR man named Tom Mandibole as its face and right hand. Our first encounter with Mandibole and his Lynchian street gang of meat-gnawing pancake-make-up thugs in cheerleader skirts and varsity jackets is chilling and strange:

The goons and the Mares were far less of a concern than the master of ceremonies himself. He impressed me as a spider, coiled and alert, poised to spring upon its prey. “What lurks in the darkness of interstellar space? The interstellar reaches of our souls? Terror.” Mandibole reclined, motionless, hands in plain view, yet his whisper emanated behind my left ear. Then, louder, “The emotion you’re experiencing. It’s terror. Terror ruled the indigenous tribes of the Valley. Terror motivated the white colonists. Of course, men fear the wilderness, the natural features of the land. That’s why men deface it at every opportunity—burn it, bulldoze it, hack it to stumps, and pound it to gravel. They desire clear lines of sight.”

I disliked how he said “they” in reference to humanity.

Coleridge is a hardcore skeptic, a Scully who cracks skulls. He’s experienced much that he can’t explain, but his sanity is kept in check by his ability to rationalize the world around him. Someone from a world of uncanny killers and powerful men who live by the fear they generate is the perfect investigator in a world where what matters is belief. If the boss isn’t pure evil, why not just whack him? If you have big enough ju-ju, you might survive. Barron played his cards very close to his chest in Black Mountain, which involved MKULTRA and CIA research into mind control and hallucinogens, and how such tools became lethal in the hands of a psychopath called The Croatoan. In this novel he is more confident that readers will accept occasional forays into the mythos he’s built over decades of award-winning short stories and the Pynchonesque thriller The Croning, even if his protagonist does not. And it works.

He doesn’t play games with our expectations or deny us satisfaction with smoke and mirrors:

The drive back to town blurred. My attention was repeatedly drawn to the rearview mirror. I experienced a “watched” feeling I’d sometimes picked up on in the Alaskan boonies. That very real sense the land itself wants you gone. Her immune system too reacts to perceived threats by sending agents after you— wolves, bears, blizzards, men deranged by cabin fever, anything handy. What kind of antibodies did this part of the country have at its disposal? Mate a genius locus with a partially constructed supercollider and gods only knew the result.

The supercollider, a quantum Ourobouros buried beneath the bedrock, its hypermagnetism twisting what lies above like the toxic fumes of a SuperFund site, is both symbol and actual as the altar and object of worship for which people will perform blood sacrifice, for both what it brings, and what it represents. When the Large Hadron collider was turned on, we held our collective breath that it wouldn’t create a micro-black hole and crush us and the planet like diamond in a titan’s fist. The architects behind this one have other things in mind, an apocalypse to save us from our own naïveté and curiosity as we cry out “Ollie Ollie Oxen Free” into the great void and hope what hears us is friendly. This leads to an inevitable confrontation where our aging anti-hero may become the next sacrificial victim.

Coleridge is great company, a Warrior Poet who waxes violent when need be, and doesn’t try to baffle us with philosophical bullshit. He knows what he is, a killer, and he has turned his instincts into a living that those around him can tolerate. Laird Barron has given us my favorite new crime series, one that flirts with unanswerable questions best asked on dark nights under cold stars, but never loses sight that crime and violence are always matters of blood and the heart. 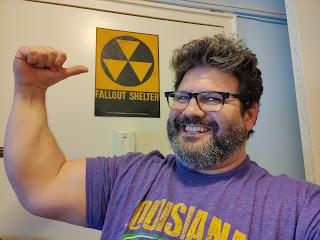 Thomas Pluck has slung hash, worked on the docks, trained in martial arts in Japan, and even swept the Guggenheim museum (but not as part of a clever heist). He is the author of the Jay Desmarteaux crime thriller Bad Boy Boogie, which was nominated for an Anthony award, and the story collection Life During Wartime, which includes "Deadbeat," chosen as a Distinguished Mystery Story of 2017 in The Best American Mystery Stories
Posted by Rusty Barnes at 8:40 AM