Beneath The Black Water, fiction by John Rector

Deputy Carson wiped the humidity from the inside of the windshield and squinted through the glass. The distant shapes were still a blur, so he rolled the window down and stuck his head out into the thick night air.

He wanted to believe it was true, but he knew it wasn’t. The lights were not swamp gas, they were fires; a single file line of torches moving just beyond the trees, snaking deeper into the heart of the swamp.

The old man had been telling the truth.

Carson glanced over at the shotgun in the passenger seat and thought about his next move. He didn’t want to go into the swamp. He didn’t want to be anywhere near the swamp, especially at night, but there was a code between lawmen, both past and present, and he’d given his word.

But it couldn’t be true. It just couldn’t.

Carson never asked the old man what he did back when the marchers came through Mississippi, back when he’d worn his own deputy’s badge. He didn’t want to know because it didn’t matter. Those days were a long time gone, a different world than the one he’d been born into. If the old man was to answer for his actions, then so be it, but he would answer in the next life, not this one.

That was the promise he’d made.

Carson looked over at the shotgun once again, and this time he picked it up and held it close. It was heavy, and the weight of it in his hands helped him find his legs.

Slowly, he opened the door and stepped out into the dark.

The old man didn’t recognize all of them, but he remembered a few.

At least, he thought he did.

It’d been so many years.

He studied their faces as they walked, trying to place them. Most were unfamiliar, but others slipped into his memory like wisps of smoke, barely touching his mind before dissolving back into the dimness of the past.

But he did remember the kid in front of him.

In truth, he’d never been able to forget him.

He remembered the way the kid had smiled and laughed and sang all of those songs, over and over, so confident in his belief that the world was a fundamentally decent place.

Of course, all that changed after Sheriff Tyler knocked one of his eyes loose with a ball-peen hammer, leaving it dangling against his black cheek like an overripe cherry.

He remembered Sheriff Tyler laughing, and he remembered his own youthful laughter. The sound seemed to go on and on in his memory, like maybe it had back then, too. At least until Sheriff Tyler called for the wire cutters.

Then the screaming started.

But that was over fifty years ago. It couldn’t be the same kid, even if he had lived, which he hadn’t, he’d be old himself by now.

“Where are you taking me?”

The people around him kept moving, silent, weaving through the trees, their torches burning bright and blue.

The old man thought about Carson, wondering if he’d seen the torches. There were so many of them. He had to have seen them. Unless. . .

Unless Carson forgot his promise.

He pushed the thought away. Carson wouldn’t forget. He was practically a son to him, and he wouldn’t back out, not after he’d finally made him believe.

And he had made him believe.

The old man remembered the look on Carson’s face after he told him the marchers had come back, that he’d seen them standing outside his window at night, staggered across the fog draped lawn, perfectly still, fading in and out with the moonlight.

It took a while, but eventually Carson believed him; he was sure of it.

So where was he?

The old man looked back over his shoulder in the direction of the road. There were no lights and no sounds other than the night bugs and the smooth crunch of his footsteps on dead plants.

Carson was out there somewhere.

They stopped in a clearing beside a mirror of calm black water and stood in a half circle, the torches burning a clean blue light, the old man in the middle. He knew this clearing, and now he understood why they’d brought him here. This was where it had ended for so many. Dead or alive, it didn’t matter.

They all ended up in the water.

The old man looked out at the empty stillness of the swamp and remembered.

For one terrifying moment, the old man thought he might break. He felt tears burn behind his eyes, and he blinked them back hard. Every part of him wanted to turn and run the opposite way, but he couldn’t do that. He wouldn’t give them the satisfaction.

Instead, he looked at the kid in front of him and smiled.

“You ain’t gonna make me scream, boy. I promise you that.”

The kid didn’t say anything.

“Hear me, you God damned nigger. I ain’t gonna scream.”

The kid’s face showed nothing, and he didn’t look away.

The old man was about to say it again when he heard something large, impossibly large, slide through the water behind him. When he looked back, he felt his bladder release.

“I ain’t gonna scream,” he said, again, but this time his voice was soft, no louder than an evening prayer. “Jesus, Carson, where the hell are you?”

The old man felt several hands on his shoulders, grabbing his shirt, tearing the fabric away. He saw a quick flash of metal in the blue moonlight and felt a cold pain slice along his side, just below his ribs. He gasped as the blood flooded wet and warm down his side.

The hands pushed him toward the water.

The old man tried to fight, but his legs folded under him, and he dropped to the wet ground. The dirt beneath him felt slick and cold and rotted.

Once again, something whispered through the water, and the old man moaned. He knew what was out there. They’d been there for as long as time, always waiting, always hungry.

The hands lifted him, pushed him forward, into the water.

The old man went under, and the shock of the cold sucked the breath from his lungs. He fought for air, and when he finally broke the surface, he shouted at the gray line of faces along the shore.

“I ain’t gonna scream. You won’t get that from me. You hear me?”

He didn’t know if they heard him or not, but in the end, it didn’t matter. In the end, there was only the water and the darkness and the timeless movement of things below.

And in the end, he did scream.

The torches disappeared from view as soon as Deputy Carson entered the swamp. He followed his flashlight, weaving between cypress trees. Somewhere up ahead, he heard the old man’s voice, quiet at first, then shouting.

He saw the clearing beyond the trees. There was movement out there, and he lifted the shotgun. The old man stood on the edge of the water, alone, with his arms held out to either side. He yelled to him, but the old man didn’t turn. Instead, he stepped into the swamp.

The old man had lived out here his entire life. He knew better than to go into the swamp at night. It wasn’t safe.

Night was when they fed.

Carson pushed himself forward, moving toward the clearing. Every muscle in his body tight, ready to snap. As he got closer to the water, he fought the urge to turn away, desperate to not see what he knew was coming.

When he reached the clearing, the old man spun back toward the shore and yelled, “I ain’t gonna scream. You won’t get that from me, you hear me?”

“For God’s sake,” Carson yelled. “Get the hell out of there!”

But it was too late.

The water boiled up around the old man, and he went under. Several seconds passed, and then he surfaced one more time, made a noise that sounded to Carson like laughter, and then he was gone.

Carson crossed the clearing. By the time he reached the edge, the water was calm again. He shone his flashlight over the stumps of cypress trees breaking through the black surface like rotted teeth.

The voice shocked him, whispering from inside his head. Carson spun around, convinced that the words had come from somewhere behind him. He scanned the clearing with the flashlight, and for a moment he thought he saw…

Something, ancient and dark, slid silently below the surface of the water. It was close, too close, and Carson jerked away from the edge, tripping and landing hard on the ground. He saw a shadow break the still surface, its yellow eyes seeing only him before slowly slipping back beneath the black water.

Carson felt a scream build deep in his throat, and he fought to keep it there as he scrambled to his feet. Before he could turn and run, he saw them all. Dozens of pale gray faces scattered among the trees, watching him.

He lifted the gun, squinting against the darkness.

Shadows, he told himself. Only shadows.

Behind him, the sound of footsteps. He turned, swinging the gun from side to side, but there was no one.

Then a single voice, sharp and insistent, sang into his mind.

Carson turned, searching for the source of the sound, hearing only his breathing, heavy and labored. He said, “Who the hell are you?”

This time the answer came in a chorus of voices.

We are old, they said, and we are patient.

And then there were images, terrible images, forming behind his eyes.

All we have is time.

Carson squeezed his eyes shut, but the images kept coming, more and more vivid, climbing over each other, worming together in his mind.

Because out here, under the water. . .

Carson heard himself scream as the chorus continued.

There is nothing but time.

No, the old man had screamed.

Carson took the cap off the bottle of Jim Beam and drank until his throat burned, then he set the bottle on the ground at his feet and picked up the shotgun, bracing the barrel under his chin, reaching for the trigger.

In the end, screaming was the only thing that made sense. 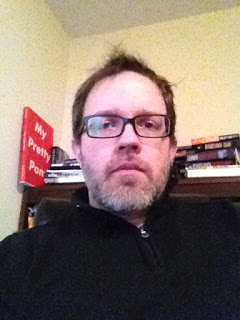 John Rector is the bestselling author of THE GROVE, THE COLD KISS, ALREADY GONE, OUT OF THE BLACK, RUTHLESS, THE RIDGE, and BROKEN. His short fiction has appeared in numerous magazines and won several awards including the International Thriller Award for his novella LOST THINGS.

He lives in Omaha, Nebraska.

Email ThisBlogThis!Share to TwitterShare to FacebookShare to Pinterest
Labels: beneath the black water, fiction, john rector