The Price of Copper and Brass, fiction by Jeff Esterholm

It was important to remember where you came from, to call up at the appropriate time the requisite grit. Nonetheless, Gustafson knew himself to grow wistful, driving in the old neighborhood. The cliché was like a secret code everyone from North End should be able to decipher and know: Don’t forget your roots. No matter how distant you wander from that rougher than rough diamond place, recall that you grew up there.

His mother raised her nine children—their old man would sometimes drop-in, in port, off the boats, drunk and abashed, but with cash—two blocks from the shipyard. Her old clapboard two-story was torn down ten years ago by Gustafson, up from Minneapolis for a long weekend. He sold off the salvageable wood to some artsy-fartsy folks from Duluth, and some Ojibwe guys bought the Monarch wood and coal-burning stove. The majority of Gustafson’s brothers and sisters now lived in northern California, in coastal cities and towns, and in Ohio, on Lake Erie, always drawn to water, always far from North End. Raymond, the oldest brother, like their mother, was in the grave. Her house gone, what remained, he saw from the alley, was a small residential lot overtaken by seemingly every trash tree and shrub dreamed of in creation, ugly under the sun, or in rain or snow, much like the rest of the neighborhood, the surrounding blocks. The down-in-the-mouth leached out, visible, in different ways.

Rodney, a kid he’d grown up with, hobbled out to the black plastic dumpster by his garage with a large kitchen trash bag. A wan little girl with lunchtime smears of peanut butter and grape jelly around her mouth followed alongside him, twirling an open Powerpuff Girls umbrella. Gustafson rolled down his window, stepping on the brake. “Hi there, Rodney.” He nodded at the girl.

The other man smiled, wiped his hands on his dungarees before shaking hands with Gustafson. “My granddaughter. Nancy.” He had to be sixty-five, sixty-six, a few years older than Gustafson. Rodney lived on disability from the long-gone steel plant in Duluth; Gustafson had always liked him. Honest kid. Honest to a fault. His smile now, that was questioning. “Patrolling the alley there, are ya?”

Gustafson lifted his eyebrows: maybe, maybe not. “Just up for a few days. Any changes?”

Rodney sucked his lips in like he had no teeth. “No.” He took a look down the opposite side of the alley, then back at Gustafson. “Nope. Same old same old.”

Gustafson thanked him, said goodbye to the little girl, told Rodney to take it easy, told them both to watch out for the rain.

It was that particular house toward the end of the block that Rodney had glanced at. That house, its yard, was all of a certain North End setting.

Continuing his slow roll down the alley, Gustafson could see the backyard of the place was mud and clay ripped up and churned by wide truck tires, big boy toys, the orange-brown slime rooster-tailed against the owner’s garage; the neighbor’s garage befouled in the same manner. Gustafson understood the people next door wouldn’t complain. And as if anyone would dare trespass on this rutted muck, the owner warned them off with a tire-and-two-by-four barricade—two stacks of tires, at least six feet apart, an old dark two-by-four stretching from one stack of gray-black rubber to the other, a tire on the top of either end of the wood crossbeam, weighing it down. The two-car garage that went with the property, besides the muddy decoration, had its door dented and askew, likely rammed in the past by a pickup truck, probably driven by the property owner.

The sky was a heavy, washed-out blue flannel; April, cold and wet, the month when the smelt ran off Wisconsin Point. Raymond should have run. Gustafson’s brother’s life began roiling that afternoon, forty-plus years ago. He’d been washing his ’72 Plymouth Satellite, a sea-green four-door, at a Connor’s Point slip. The slip was east of a yard where an arm of a corporate monolith dismantled and scrapped Great Lakes ships past their prime. Gustafson could see the spot yet, all these years later, past the shipyard and across Howard’s Pocket, from the old neighborhood alley he eased down.

The way Raymond told it, the two of them in the kitchen of the upper duplex apartment Raymond lived in with his wife and five kids, each man with a sweaty brown bottle of Hamm’s, was that he had been washing his car when he noticed the chain. He chuckled. “The chain was looped around a piling, the other end slung tight over the edge, into the water. I’d wiped down the car — it was that sunny day—remember?—so I thought I’d give the chain a tug. It was heavy. Oh, boy.” Raymond’s eyes shone like a banjo ringing, a phrase the older brother often used to describe delight in others.

“Buckets, not just one. I eased them up, one after another.” He’d set his beer bottle down on the table, dramatized the drawing up of the chain, hand over hand. “Each of the buckets were full of scrap, copper, and brass. From those old boats, they were busy scrapping down the point.”

Raymond was proud of his discovery; his younger brother, thought differently. “Goddammit, you know who probably stole it all in the first place—”

“Fuck them.” His eyes widened to emphasize the point. “I told myself, ‘Ray, you’ve got yourself, Ellie, and five kiddos to support—”

“But the O’Neill boys. Raymond.”

Wet, like the short-straw Jaycee dropping into the Tri-State Fair dunk tank, the sky opened up, and the rain came down. Gustafson looked again at the backyard mire before pulling away. By nightfall, it would be a thick soup.

At the motel across from the steakhouse on Fifth, Gustafson watched the local news. The smelt run was the second story in. The run would peak that weekend, like the night the O’Neill boys got Raymond on Wisconsin Point.

Gustafson thought of the boys now: Arne housed at Waupun; Clifford at a prison in Minnesota; Gene and Lawrence perished one Fourth of July near Pattison Park, throwing M-80s from their speeding car. Stuart, or Stu, he still lived in town, a never-to-retire con-of-all-trades.

Growing up in North End, the Gustafsons and O’Neills played football on Rusk Avenue, and baseball too. Swimming in Lake Superior in summer, skating on Howard’s Pocket, and the neighborhood rink in winter. Neighborhood kids who grew up together grew up and away from each other, the Gustafsons turning into strivers for at least the middle ground in life, the O’Neills looking to turn the easier buck, they believed, through criminality. The families managed the neighborhood cordiality. They knew each other; they shared a common history.

No one mentioned the copper and brass haul; Raymond’s filching of the O’Neills’ boodle, no one knew about it, perhaps wouldn’t care, as Raymond believed, if they did.

As he had in years past, Raymond went smelting with the O’Neills when Stu invited him along.

Gustafson heard about it later, how the O’Neills got his brother. The O’Neills and Raymond, along with the other neighborhood buddy, Rodney—someone to pass the word: Don’t fuck with the O’Neills—drove out to the Point for the smelt run.

They arrived late. Everyone was back on the beach, nets pulled in, the small silver fish in washtubs and buckets. Boomboxes pumped out the Stones and Bowie. “Rebel Rebel.” Rodney remembered that one. The beer flowed from kegs, cans, and bottles, and the bonfire flames snapped, the driftwood popped, the noisy partyers cast in orange. The O’Neills trotted Raymond down the beach and away from the firelight toward Dutchman Creek, Rodney tailing them warily. The raucous gathering of smelters flickered, a dying star.

The O’Neills beat the hell out of Raymond, Rodney told Gustafson. They didn’t have to do the other thing, but they did. “Who did it? Did they take turns? Just one of them? Their leader?”

Rodney nodded at that last: Stu.

He had pressed Raymond’s face into the wet sand as if attempting to create a death mask. After he was sure Raymond had suffocated, he had his brothers roll him over. At that moment, a wave rolled in, dissolving the imprint his terrified face had made in the sand.

Gustafson held open the storm door and knocked, the rain pattering down as if there would be no end to it ever, his boots thick, slippery with mud. An older man pulled open the backdoor, looked back into the house, then joined Gustafson on the back porch.

O’Neill nodded. He was an old sixty-five, looked like an orangutan with the belly, the long arms.

Gustafson pictured what he had planned for so many years: suffocating, drowning Stu O’Neill in the backyard slurry, packing his nose, his mouth, his throat — choking him. A crowd would gather under the evening rain in the backyards on either side of the mudflat. The few neighbors, old-timers, they would know. They would watch from the other side of the fence, smoking their unfiltered cigarettes, drinking Old Milwaukee. They knew. They wouldn’t call anyone.

“I always wondered when you’d show up,” O’Neill said. He looked away, peering at the hidden moon, and then his seven-inch prep knife swung up for the evening’s opening move, slicing Gustafson to the sternum.

No one would be calling anyone. Those who peopled Gustafson’s dream of this night, they were not there to watch. Only Rodney, standing in the shadow of a garage, holding his granddaughter’s umbrella over his head. When O’Neill finished, Rodney turned and walked home. 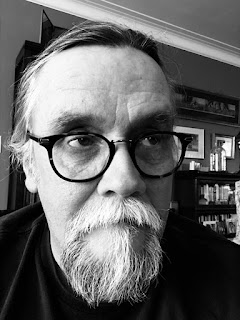 Jeff Esterholm’s short stories have previously appeared in Akashic Books’ Mondays Are Murder, Beat to a Pulp, Close to the Bone, Crime Factory, Mysterical-E, Mystery Tribune, Pulp Modern Flash, Rock and a Hard Place, Shotgun Honey, and Tough, as well as in Midwestern Gothic, Cheap Pop, Regarding Arts & Letters, and Wisconsin People & Ideas. He, his wife, and their goldendoodle hellraiser live in Wisconsin at the head of the Great Lakes.