Security must have fucked up.

He didn’t know how the girl snuck on set. But here she was, pushing her way into his trailer, rolling up her sleeve to show him her tattoo.

“I’m so sorry to interrupt you, Mr. Chambers,” the girl said.

But you did, he thought. And now you’re going to eat up however many minutes of my time, my precious fucking prep time, telling me how much my stupid show means to you.

He smiled politely, thinking, Great. Here I am still hungover from last night because Carol, my on-screen mom, insisted on celebrating her last day on set. With my luck, this stupid show will get picked up for season—what? five? six?—and I’ll be seeing Carol again in eight months. Have to act more of those stupid kitchen scenes where I confide in her what a burden it is, being a teenager born with the collective powers of the Greek Pantheon. How many more years stuck in this stupid city where it rains all the goddamn time? Hollywood North my ass—

—and what was that shit the girl said about helping me?

”Girl” was a stretch. She could have been thirty, a decade older than him for all he knew. But a girl in her mannerisms, the jelly-legged way she gazed at him like he was a superior creature. A fangirl. Rail-thin and hawk-featured, her pale arms hanging out of the frayed cuffs of the grubby man’s shirt she wore.

Scott noticed the girl was holding a gun.

The tattoo on her arm was of him. A terrible likeness. Scott in the Captain Destiny uniform, cape billowing out behind him as he soared through the clouds. Christ.

She transferred the pistol to her left hand and began awkwardly rolling up the other sleeve.

“It was you that taught me to believe in myself,” she said, pausing for him to acknowledge the compliment.

“Before I started watching, I was at loose ends. I admit it, I know it’s a sin, but I used to think about suicide. That’s how low I was. Then I heard about this show filmed right here in my hometown, and I started watching, and I saw you dealing with the same things I was. And everything started to hurt less, you know? It was a miracle, really. A miracle is the only way to describe it.”

Jesus, she was a fucking local.

Captain Destiny was filmed in a far-flung suburb of Vancouver. The town had one main street, one second-run theatre, eight churches, a race track, and a flea market. Part of Western Canada’s miniature Bible Belt. The town was a perfect stand-in for Smallville, Starling City, and Smith’s Landing, where Captain Destiny’s alter ego hailed from.

The locals seemed split between meth heads and Jesus freaks. This girl seemed to have claims to both camps.

On her other sleeve, the girl showed him a matching tattoo, a Kurt Cobain Jesus hanging off a wobbly-looking cross. The picture was little better than a stick figure, but each wound had been etched on Kurt’s body in glorious bright red detail. Above it, the word RE P e N T.

“It was through you that I reconnected with Him,” she said. “You saved me. And I’m here, Mr. Chambers, Scott, to do the same for you.”

Up till now, she hadn’t pointed the gun at him. The barrel had been pointed down a few feet to his side. Now she brought it up, using it to gesticulate as she spoke.

“You see,” she said, “I read up on you on the world wide web. I learned all about you. I rented the show you were on as a child. It was really good, you were really great even then.”

“Thanks,” he muttered, eyes on the gun.

“You’re welcome. I even watched the commercials you were in. The cereal one, you were very funny. You can do anything, Scott, if you put your mind to it. I hope you know that.”

“Yes. And it made me sad when I read that rumor about you. That you were—you know.”

Rumor. He hated to think of any part of himself as a rumor. He was proud of himself, would’ve been happy telling the world, and fuck ‘em if they didn’t want to watch his show.

But his manager had explained to him the demographics involved, the realities of show biz. “In a few years, Scottie, by all means, do what you feel is best. But your hit show is a hit because of women thirteen to thirty, and that’s a tough demo for a comic book show to hold. They want to keep certain fantasies about you, Scott...it’s just how it is...”

“How it is” meant broadcasting to the world he was something he wasn’t. Just another reason he hoped the network pulled the plug soon.

She was waiting for his answer, holding the gun loosely, aimed at his knees.

Scott said, “Yeah, it’s a rumor. I’m actually seeing someone. A girl. We’re thinking of getting married, in fact.” Anything to get her out of there.

“I’m glad to hear you say that,” she said. She raised the gun towards his chest, an accusatory finger of blued steel.

“You see, Scott, I want to believe you, but I was actually at the Chateau Vancouver last month. You were doing a signing in the city, remember, and I thought I’d come down. I was hoping we’d get a chance to talk then.”

Christ. Up till then he’d thought there was no real chance she’d hurt him. He’d dealt with crazies before. Now he felt his odds plummet and knew he’d have to get himself out of this.

“I was in the lobby,” the fangirl said. “I stayed there all night. I saw you come in late with that young man, and I saw you kiss him, and I waited and then in the morning, I saw you leave, and kiss him again goodbye and listen, Scott, don’t you know how that makes Him feel?” “Him who?” he said. “Makes who feel?”

He looked blankly at her, this fangirl, this woman who was here to kill him. She had tears in her eyes, and she was raising the gun.

Scott Chambers fell to his knees.

“I know it. But I feel so weak. Please, please help me. You were sent here to help me, right? Sent here by Him?”

He was crying—turning on the waterworks had never been difficult. Yes, he was just a kid himself, and yes, he was on a crap superhero show shot in this pissant backwater town. But he’d known since childhood, since day one, that he could deliver when it counted.

But it didn’t hurt that he was scared shitless.

“Will you help me?” he said in his best broken voice. “Will you—will you pray with me?”

It was working‑the barrel drifted downward. The girl sank to one knee, her eyes as round and luminous as the rose windows in a Gothic cathedral.

Scott lowered his head, leaving his eyes open just enough to watch the gun. He prayed for real. Dear Lord, if you’re there, and you’re not the asshole these bigots and homophobes make you out to be...a little assistance here...

“Lord,” the girl intoned in a full, sonorous voice. “Lord, we ask that you guide Scott here—that you cleanse him—that you—”

She broke off, disturbed by the knocking on the door. The loud caffeinated tapping of Stacey, the director’s assistant.

“Hey Scott,” Stacey called out. “Sorry to disturb you. This a good time?”

He froze, not knowing if the girl would shoot him for speaking.

“Joyce wants to go over the blocking for the fight with Kid Achilles. She says fifteen minutes, if that’s okay with you.”

He looked to the girl, who  had the gun pointed at his throat. She gave no sign how she wanted him to answer.

“Scott, everything okay?” Silence for a moment. Then Stacey opened the door.

Percussion and light, then a howling pain from his scalp. The fangirl had shot him.

Blood was in his eyes and he couldn’t see much. Through the pain he could hear the woman snarling, furniture being toppled. Stacey struggled with her, wrested the gun from her hand. He heard it hit the carpet.

Scott swept his hands out, feeling for the weapon. Caught the warm barrel with his fingertips, dragged it back to where he could get his hand around the grip.

The fangirl barreled into him with a linebacker’s force. The gun went who knows where. He felt her fists on his cheeks, his eyes. He reached and grabbed for her throat and held on till she bit him.

Flailing elbows broke his feeble chokehold. He knew she was now picking up the gun. He heard her cock it. His hands flew up instinctively to his face, impotent protection from the gunshot he knew was coming.

There was a loud shhh-chunk and the sound of particleboard being smashed. Stacey hit her with a drawer from the dressing table.

A moment later the security guards  dragged the woman out, telling Scott the police are on their way, and sir, we are so, so sorry about all of this.

The set medic, Danny, treated and bandaged him. Scott asked him to describe the damage.

“It’s a deep crimson furrow,” Danny said, “still spurting rivulets of blood.” Of course, Danny would describe it poetically; he’d been haranguing Scott at Craft Services every morning to read his fucking screenplay.

“Will it leave a scar?” Scott demanded.

Don’t be, Scott felt like saying. A scar! It was his ticket out of the show. No way the network would want a scarred leading man. And even if they did, he could say the trauma was too much to continue.

No more teen heart-throb. He’d be a scarred, brooding character actor—he’d be taken seriously. And off-camera he could be himself.

Scott Chambers smiled and wondered if maybe there was someone watching out for him after all. 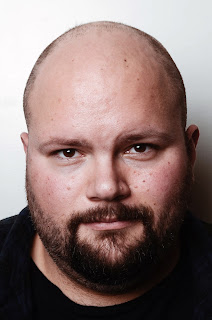 Sam Wiebe is the award-winning author of the Wakeland novels, one of the most authentic and acclaimed detective series in Canada, including Invisible Dead, Cut You Down, and Hell and Gone. Wiebe’s other books include Never Going Back, Last of the Independents, and the Vancouver Noir anthology, which he edited.
Posted by Rusty Barnes at 9:48 PM No comments: