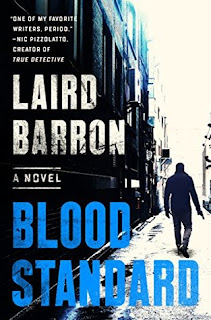 Rumors of what would end up being Blood Standard, Laird Barron’s first mainstream crime novel, had been going around for years. As a devotee, I first heard whispers that Barron was writing a noir sometime in mid 2014; there were no other details to the gossip, no plot hints, character ideas, or even a sense of where the book would be set, but the rumors were more than enough to get anyone even slightly plugged into the gray area where crime fiction and horror fiction overlap very excited. Shortly afterward, when Barron confirmed in a Facebook post that he was in fact writing a noir novel, I don’t think anyone could have imagined a more perfect pairing.

Barron, the 21st century's undisputed king of cosmic horror has always had a soft spot for characters straight out of classic noir: whether it’s the Pinkerton or the private detective stumbling across unimaginable truths, the CIA spook or the grizzled military commander monkeying with things they do not truly understand, miners and geologists, comfortable only in solitude but forced to work together to stay alive, or the lavishly rich, surrounding themselves with potential victims. Barron’s collections were full of gruff men of action whose minds were destined to end up as broken as their bodies. The promise of those characters, and the language and atmosphere Barron used to wring every ounce of tension from their suffering, but set in a world in which Old Leech was not to reveal himself? It was almost too good to be true.

Enter Isaiah Coleridge, another of Barron’s signature hardscrabble heroes. A mob enforcer sent from the warm arms of The Outfit to the outer edges of the universe, in this case, Nome, Alaska, Coleridge witnesses a money-making slaughter scheme on the Chukchi Sea and, maybe for the first time in his life, does the right thing. Or the wrong.

Exiled for his sins against the Outfit to the quiet Hudson Valley of upstate New York and held in check by an awareness that the Outfit might come calling at any moment to collect their pound of flesh, Coleridge settles in to a quiet life on a farm. It’s only when Reba Walker, the farm owner’s granddaughter, goes missing, and Coleridge promises to find the girl, that he is pulled back into the world of greed and violence, and he jumps in with both feet.

The violence in Blood Standard isn’t meditative or philosophical as in the majority of Barron’s previous work. It simply is, an essential aspect of Coleridge’s life that is so commonplace it is barely worthy of note. Whether or not that is a good thing will be the cause of some debate among readers. The novel moves along at an almost impossible pace, most scenes action-packed and filled with growing mystery or tension or violence, but the language is clipped, especially in comparison to Barron’s horror work. In previous short story collections readers were treated to horrific imagery and the suggestion of the baroque and the grotesque awaiting behind even the most commonplace of items and incidents, elements which I think makes Barron one of the best prose stylists I’ve ever read. In Blood Standard, most of that is gone, excised instead for action and forward momentum, though Barron occasionally slows down the ass-kicking to deliver a knockout of a section, including the following plumbed from the depths of Isaiah’s fever dream:

I wandered through Elysian Fields and the Boar of the Wood hunted me, his tusks as sharp as spearheads. He felled the tall grass with each sideways swipe of his massive head. My grandfather, dressed in skins and a necklace of sharks’ teeth, floated always two places ahead his gaze serene as a storm cloud. He raised a flint ax and I woke, the blare of a conch horn trailing into the ether.

I’ll be honest and admit now that there were times when reading Blood Standard that I wished the Barron prose I’d fallen in love with would reappear, that I’d get more of the above, an exploration of the sense of cosmic doom that immediately follows a head cracking--an unconsciousness made of cold stars and the void behind them--but it’s also entirely possible that the only reason I wanted that is because that was the book I’d been imagining for four years, and it’s very likely that readers who haven’t read Barron's previous books won’t find anything amiss at all. Besides, Blood Standard is straightforward about the kind of book it is from the jump; if there’s ever been another book that greets the reader with a balled up knuckle sandwich right on the title page, I can’t think of it.

That’s not to say Blood Standard isn’t a recognizably Laird Barron novel, either, as it is absolutely packed with what some have come to call Barronisms, each circling one another, all of the converging and separating in Blood Standard s murky mystery. Lurking at the edge of the plot are unscrupulous FBI agents, a group of private military mercenaries working for an atrocity-prone organization known simply as Black Dog, mobsters (so many mobsters), a particularly bacchanalian Beltane fire celebration, and Isaiah’s father, a cold-hearted son of a bitch who, if he’d been copy-pasted into Barron’s first breakout story, “Old Virginia”, probably would have staved off all the miseries in that story and saved the day. Plus gallons of whiskey and racks and racks of guns.

It may seem amiss, at this point, that for book supposedly about the mystery of a missing girl, I haven’t discussed the mystery that much. That’s for two reasons. The first is that the mystery works perfectly well as a means to drive the plot forward, which is to be expected in a modern crime novel. Blood Standard performs admirably, each chapter deepening the mystery while also suggesting increasingly sinister explanations. But the more interesting reason to discuss everything but the mystery is that the resolution of what happened to Reba Walker may strike some readers as unsatisfying. At first, I might have agreed with those readers, but that’s only because it took me a while to understand that the potentially unsatisfying resolution of the mystery is exactly the point. Blood Standard is an action story wearing the skin of a mystery novel, but it’s also the story of Isaiah Coleridge and his attempt to find his place in a world where even the criminal rejects have rejected him.

A cross between Jack Reacher or Clyde Barr novels and some of Dennis Lehane’s more introspective and gothic work (Shutter Island and the displaced narrator of The Given Day seem like obvious touchpoints), Blood Standard is less about the mystery of what happened to Reba Walker and more about what Isaiah Coleridge--and men like him--have to do to survive the modern world. If Coleridge, with all his sins and his Barbarian nature, had been able to set the world right, it would ring false, like Barron were giving us a neat ending simply for its own sake, but as anyone who has read Barron before knows, he doesn’t believe in neat or happy endings: the universe is too complex for that, as even the section in which the resolution is revealed is titled “The Gordian Knot”.

A novel about an difficult man trying to resolve a hopeless mystery, while also trying to accomplish something else that may as well be impossible, starting a new life, Laird Barron’s first crime novel is as much a character study as a beat ‘em up, rich with all the signature themes longtime Barron readers know and love, while also being straightforward and action-focused enough to welcome a mainstream audience. Whatever comes next for Isaiah Coleridge will surely be haunting and difficult and expansive on the world created here, and if it’s half as much fun as Blood Standard, I can’t wait.
Posted by Rusty Barnes at 10:07 PM No comments: