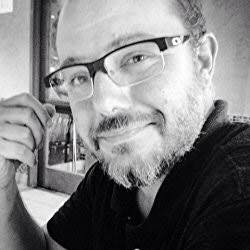 Ed Kurtz is the author of The Rib from Which I Remake the World, Bleed, and the Boon trilogy, among other novels. His short fiction has appeared in Best American Mystery Stories and Best Gay Stories Originally hailing from Arkansas, Ed lives in New England.
Posted by Rusty Barnes at 9:28 AM No comments:

A Wind of Knives, by Ed Kurtz, reviewed by Rusty Barnes 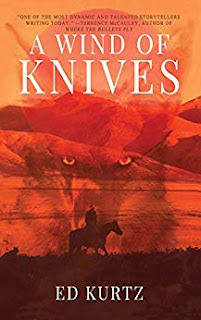 Ed Kurtz's A Wind of Knives, in many ways, a traditional revenge story,. Daniel Hays awakens one day to the horrifying sight of his hired man, Steven, body bloody and mutilated, hanged by the neck and dead. He vows revenge, but not only for the reasons you might think. Steven had been his hired man, yes, but also his lover. The novella that follows is Daniel's long journey to vengeance and a muted, odd sort of peace.

Kurtz is a fine and sensitive writer, first. His words, even as a horror writer primarily, and perhaps more accustomed to showing all the gore that comes with death and dismemberment, never seem to outstrip what they're saying. "Steven's left eye stared glassily; Daniel pushed the eyelid down with his thumb, but it popped back open." The language is always in service to the story, almost invisible, guiding us along through the grim events with a firm hand and steady influence, even as his strict attention to rich and specific detail reveals horrifying sights, from the dead man's eyes refusing to close to a man rising from his gravedirt with a burst of ghoulish energy and a worm in his pocket.

The plot of the book is pretty straightforward. Daniel follows what clues he has--not many--to a group of men who are responsible for something evil. Daniel's unsure if that something includes Steven's death, though, and he follows some leads and gets off-track. He meets an array of characters, along the way, men and women who love him. They help him and thwart him to varying degrees, their actions always reflecting Daniel and Steven's relationship, giving us more insight into why Steven's death is so traumatic. That death never leaves Daniel's mind, and when finally confronted with the most monstrous of evils, Steven's killer, finds resolution only in a muted way. the ending resonating in true noir fashion: there's a way for the losers in the world. They rarely see victory in the ways they'd like.

What drives me to read is discovering writers like Kurtz, in whose hands we're capably guided through places we'd rather not go to ends we don't expect. I imagine this was even rarer when the novella first came out. I can't think of many--any?--bisexual characters in the western genre, or very often in genres beyond, and the re-release of this book proves even more fully that we need writers like Kurtz to show us the way. Writers like him are in short supply, good,indelible writers especially and this book is a trailbreaker in all the best ways.


I took this review and cashed in on an opportunity to ask Kurtz a few questions which shed some late on the genesis of A Wind of Knives, which I trust will be as interesting to you as they were to me.

What were your influences in writing A Wind of Knives?

I’m a tremendous fan of Western fiction from Louis L’Amour to Larry McMurtry, and I read scads of Western novels every year, but with extremely few exceptions one doesn’t see much in the way of marginalized and underrepresented protagonists. It’s a straight, white, cis-male world for the large part, with a handful of token Native and African-American characters along the way, but LGBTQ? Forget it! So in that sense, I didn’t really have an influence, apart from wanting to write a sort of anti-heroic, anti-revenge, anti-Western that is, at its core and heart, a love story.

What attracted you to the western to tell this particular story? Were you put off at all by the limited readership?

I wasn’t at all put off by the limited readership because the moment I conceptualized the story, I knew that would be the case. Readers interested in Westerns overwhelmingly aren’t going to be interested in queer content, and vice versa. It’s an uninspiring Venn diagram for a writer like me! But I’m a bisexual Western fan hailing from Arkansas with a particular kind of experience and particular stories I wanted to tell, so it had to be this one, whether it got read or not.

I'm trying to imagine the writing and original publication arc for this book and it seems as if it would have been a daunting process. Can you talk a little about the writing process for it and then how you managed to find a publisher for something seemingly so niche-oriented?

Originally, I wanted to write a full-length novel that charts the course of the two men’s relationship over multiple lifetimes, but as I closed in on the end of A Wind of Knives, I decided this was the story, full stop. What I ended up with was almost impossible to sell – a 20,000 word queer Western. No one wanted it, under a very small publisher, Snubnose Press, took it on. It was well-reviewed, but barely sold. Then the press went out of business and the book remained out of print for years. I tried again and again to interest agents, publishers, etc. in what I deem my very best work, but it was just too hard a sell for all of them. Ultimately, I reissued it myself. It still barely sells, and I’m still unsurprised. But it’s still my very favorite thing I have ever written, and certainly the closest to my heart. I no longer write or publish (though there’s at least one more novel yet to release on the horizon), so in retrospect, A Wind of Knives is what I’m most proud of.

Posted by Rusty Barnes at 10:28 AM No comments: