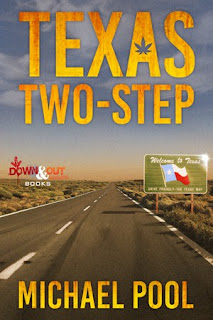 Texas Two-Step grows out of that exact sentiment. It’s unique and unwavering in its commitment to being different. To offering something unique. Texas Two-Step is not a book you’ve seen before. It’s a book that doesn’t care about crime fiction convention, but instead wants to get stoned and dance in the parking lot. It’s not a book trying too hard to give you a downer ending or thrill you with ultraviolence, it’s a book made up of those moments in long songs when you feel like the ending is just around the corner and god damn is it going to feel good when it gets there. It’s not a book interested in the philosophies of criminals or the thin line between cops and robbers, it’s a book that’s asking if you want a puff, and if not, no big deal, but it’d be a lot more fun if you came along for the ride.
Posted by Rusty Barnes at 10:09 AM No comments: