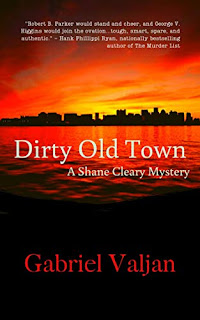 
Dirty Old Town, a short novel by Gabriel Valjan, is a slick tribute to a bygone time as well as being a cracking good detective story. It's 1975, and private detective Shane Cleary's life in Boston's South End is grim. Besides his cat Delilah, there's little companionship, and not a lot going on. In the hardboiled tradition, Cleary's wallet is thin and his prospects few, but a late night phone call from rich old chum Brayton Braddock serves to get Cleary's engines firing. And to complicate matters, Shane and Brayton Braddock's wife Cat have a complicated history.

It turns out that Braddock is getting blackmailed, and he wants Cleary to find out who's doing it. The problem centers around real estate dealings that, while not quite illegal, could serve to complicate matters for the development of downtown Boston and the suits on Beacon Hill, and indeed involve shadow groups of people--largely rich, largely insulated--who come from the upper crust of Boston's social scene and depend on those shadows to hide their complicity in all manner of things, as Cleary discovers.

Thus are we thrust into a ripped-from-the-screens '70s cinema feel novel, without a touch of nostalgic haze. From the CITGO sign to the Wonderland dog track ,, you can feel the wind in your face as Valjan's prose takes Cleary down Tremont Street toward the Little Building. This is a book with an uncommon feel for and love of the city, and it's a damned fun time. All the Boston trappings are there, from the battles between the Irish and the Italians for control of the underground to the omnipresent roots of the project that would become the Big Dig, transforming Boston's downtown in an emblem of greed and green alike.

Cleary is a worthy character indeed, with his own colorful history and a life he brings to bear on the complicated messes he finds himself in. Like Spenser and Patrick Kenzie before him, he brings a mordant humor and not-quite-a-tough-guy ease to his role. He's completely credible as someone with enough brawn and streetsmarts to make his way through Boston in pursuit of the bad ones, mobsters and police alike ticking at his heels looking for him to slip up just once.

Secondary characters reveal themselves well, like former professor Delano Lindsey, stolid-but-gay police officer Bill and his closeted partner, as well as Mr. Butch, street performer in Kenmore Square, all are lovingly and aptly detailed in prose that never goes off-track and always serves the story. Describing a ride from the South End to Beacon Hill in the dead of night:

Minimal traffic. Not a word from him or me during the ride. Boston goes to sleep at 12:30 a.m. Public transit does its last call at that hour. Checkered hacks scavenge the streets for fares in those small hour hours before sunrise. The other side of the city comes alive then, before the rest of the town awakes, before whatever time Mr. Coffee hits the filters and grounds. While men and women who slept until an alarm clock sprung them forward into another day, another repeat of their daily routine, the sitcom of their lives, all for the hallelujah of a paycheck, another set of people moved, with their ties yanked down, shirts and skirts unbuttoned, and tails pulled up and out. The night life, the good life, was on.


Valjan is a man who you can trust to take you for a ride with the smooth forward propulsion of his prose. He fits in well with the city's rich literary array of crime writers, and stakes his claim among them. One of the abiding pleasures of the reading life is coming across characters so well-written, so well-worn in their own bodies it seems as if they've always existed. Shane Cleary is one of them, and if we're lucky, we'll hear much more from him in the future, and perhaps in other projects from Gabriel Valjan, who proves with this book that there is much more life to the PI novel in Boston than might have been imagined.

Posted by Rusty Barnes at 8:02 PM No comments: 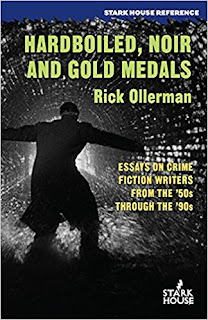