The creative duo of Ed Brubaker and Sean Phillips have worked  together for several decades, amsssing a robust body of work:, most of it with an emphasis on crime stories. Early works such as Sleeper and Incognito explored the supervillain underworld through the standpoint of active participants therein, while The Fadeout focused on the James Ellroy-tinged milieu of Golden Age Hollywood. The duo’s longest running collaboration, Criminal, follows the fortunes (and misfortunes) of the Lawless clan.. Brubaker and Phillips excel at chronicling the trials and tribulations of their hard luck, morally-compromised protagonists, while making the reader empathize with them. During the COVID-19  pandemic lockdown of 2020, this creative team shifted  from producing monthly ‘floppies’ to more sustainable, self-contained graphic albums, as exemplified by the European comics industry. Pulp was their first offering in this new format, followed at the end of the year by the debut of Reckless. Reckless is their first foray into a series character crafted in the tradition of the Men’s Adventure novel subgenre, that was ubiquitous on bus station and drugstore wire spinner racks several decades ago. As Brubaker states in his afterword: “And for years, I wanted to do something along those lines in comics, our version of that kind of series paperback “hero”  Reckless pays homage to such characters as Parker and Travis McGee, all the while adding some nuanced flourishes to the genre as well. Reckless is pulp fiction written for the Robert Stone crowd.

Reckless takes place in Los Angeles in 1981. If you have a problem and cannot go to the legal authorities, you can call a certain 1-800 number.. If the party takes an interest in your message, for a fee, they can provide assistance. This is Ethan Reckless’ business model--he is the person you contact for extralegal  discreet help.  Reckless works out of a shuttered movie theater, his base of operations, El Ricardo.  Brubaker paints a compelling backstory for Reckless. In the early 1970’s, he was nearly killed in a bomb blast that was orchestrated by  fellow leftist revolutionaries (think the Weather Underground). Although he escaped with his life, he did not come out of the explosion unscathed. Ethan has lost some of his memories just prior to and directly after the blast. He is also suffering from a subtle form of traumatic brain injury, in which all of his emotions are distant from him. Cognitively, he can remember events and emotional situations, but at this stage of his life he cannot feel them anymore-he is self-described as ‘flat’. The only time in which he receives an emotional jolt is when he feels anger and even that is a rarity. As a byproduct of his condition, Ethan is also a chronic insomniac-he self-medicates in order to get some rest.

When his assistant, Anna drops a new case in his lap, concerning a woman looking for a man named Donovan Rush, Ethan’s past comes roaring back.. Rush was Ethan’s alias back in his revolutionary days. It turns out that the woman looking for him is Rainy Livingston, Ethan’s first love (and fellow revolutionary). Rainy has been on the run from the authorities for nearly a decade, moving around from place to place and utilizing various aliases. Rainy reveals to Ethan that she needs help in procuring her share of a Kansas City bank heist, to the tune of one hundred thousand dollars. Rainy plans on using the funds to leave the country for good, so she can start over, free from being hunted. Ethan agrees to help (naturally) and sets off on the trail of Lloyd Wilder, the double-crossing bad man of the piece. Ethan’s quest takes him from Los Angeles, upstate into the Eel Valley Reservation Casino. Along the way, as these things go in hardboiled crime fiction, Ethan is lied to, roughed up by heavies and generally dissuaded from  sticking his nose where it doesn’t belong. For the sake of transparency, let me come clean- I am being intentionally vague when it comes to the specific plot points and beats of Reckless. Brubaker is a master craftsman when it comes to writing stories in the hardboiled genre. There are a variety of sneaky twists and turns that Brubaker employs in throwing the reader (and even Ethan) off track. To give more away would ruin the reading pleasure derived from this graphic album. Suffice it to say that you can never truly outrun your past and still waters run deep (sometimes, murderously so).

Aiding and abetting Ed Brubaker as usual, is Sean Phillips. Phillips is the ideal illustrator for this graphic album. His photorealistic style complements Brubaker’s plot perfectly: his depictions of the various characters, the environs of Los Angeles and the rural landscapes of northern California lends this project a level of verisimilitude second to none. Jacob Phillips’ colors are a complementary addition to his father’s line work: the hues are all mellow greens, oranges and yellows. You can practically imagine this ‘film’ playing out in your head, starring Robert Redford during his Butch Cassidy and Sundance Kid or Jeremiah Johnson days, directed by Terrence Malick or Michael Cimino at their  prime.

What sets Reckless apart from the larger paperback “hero” genre in my view, has to do with the depth of storytelling. In the character of Ethan Reckless, Brubaker portrays an individual that is emotionally distant, absolutely comfortable with violence and yet at his core, is trying to be a good human being: his services do not necessarily go out to the highest bidder. Reckless is a tarnished knight errant: a man who uses his skill set to help others in need. “So, I figure if we’re all doomed…if we’re all suffering…then why not try to help people? Make someone else’s life a little better, even just for a few days.” A fatalistic, yet romantic outsider character, in the vein of Thomas Pynchon’s Doc Sportello, by way of Edward Woodward’s The Equalizer. Reckless is also a thoughtful meditation on the failed dreams and aspirations of America (or perhaps, the American left), during the Vietnam Era. An era in which political violence was de rigueur, where agents of social change were either arrested, co-opted or killed. An era that was synonymous with COINTELPRO and the (supposed) extralegal mechanizations of The Company on American soil. California surfer pulp noir, with brains and a ton of heart. 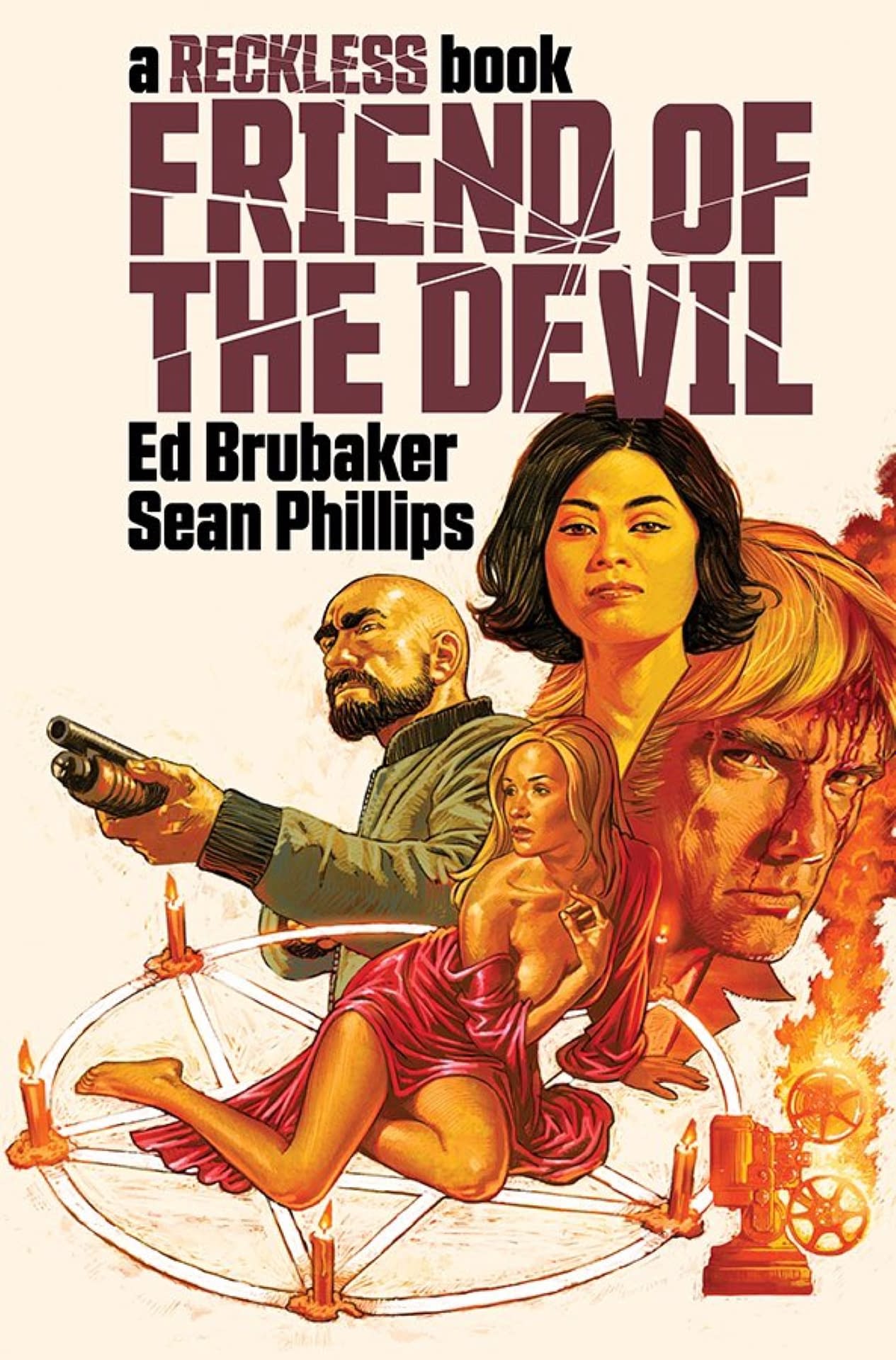 Brubaker and Phillips have created something special with Reckless. If you are a fan of intelligent storytelling, damaged protagonists with complicated pasts, evocative art or just good old fashioned pulp fiction (with a little extra food for thought), do not hesitate in picking this volume up. This opening salvo sets up the character, his motivations and mission and his supporting cast perfectly. I eagerly await the release of A Friend of the Devil, slated to ship in spring of 2021.

Anthony Perconti lives and works in the hinterlands of New Jersey with his wife and kids. He enjoys well-crafted and engaging stories across a variety of genres and mediums.  His articles have appeared in several online venues and can be found on Twitter at @AnthonyPerconti.

Posted by Rusty Barnes at 8:51 PM No comments: