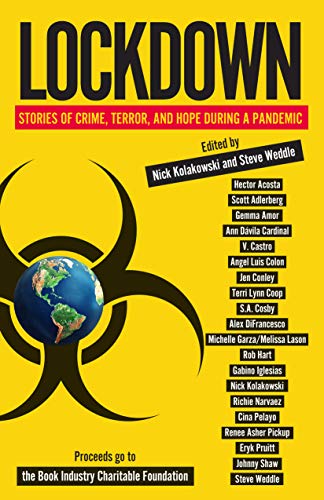 Lockdown: Stories of Crime, Terror, and Hope During a Pandemic

When asked to review “LOCKDOWN: Stories of Crime, Terror and Hope During a Pandemic”, I was hesitant to say yes. I’d seen a couple of publications put out calls for pandemic themed issues, and in almost every instance, I’d grown instantly weary reading the calls, not just because I didn’t trust the editors of those particular magazines to be able to handle such a serious subject with the care needed, though that was a part of it, but also because the nature of the calls seemed too timely, too on the nose, too expectant to use a readers own anxiety about this particular moment in the world against them. Many of us have been homebound for months, watching updates on death counts and infection rates climb higher and higher as we try to make our way though some new kind of normal. How many stories would be able to both respect the place we’re in, and also tell a good story that could exist independent of this particular moment?

The other reason I was hesitant to review “Lockdown” is much simpler; I’m friends with more than half of these writers, conversing with a majority of them at least once a week, if not more. How much could my review be worth if that detail wasn’t disclosed up front? How honest could I really be? If “Lockdown” was another average collection, how could I write a review that was both fair to people I’m friends with, and to anyone who reads the review?

Thankfully, both issues ended up being moot, as “Lockdown” is a thoughtful, challenging, terrifying, humorous, and deeply sad anthology that comes close to greatness, though it is held back by just a couple stories that don’t quite connect.

The book opens with Gabino Iglesias’s, “Everything is Going to be Okay,” which happens to be one of the single best crime fiction stories of the year. The story of Pablo, an uninsured fisherman whose wife is sick with COVID-19, and a fishing expedition from hell, Iglesias uses his personal and emotive prose to illustrate a life unseen by too many of us with extraordinary humanity and care. From the day to day struggles of getting through a pandemic in the face of a heartless system that doesn’t care, to what living without any kind of a safety net can make a man capable of, and what happens when a person truly has no choice but to do something they do not want to do, there isn’t a detail wasted or that feels anything other than richly lived and deeply earned. As deep and murky as the Gulf Pablo fishes, Iglesias sets the tone, and the bar for the rest of “Lockdown” incredibly high. More crime fiction should be like this.

Next up is Rob Hart with “No Honor Amongst Thieves” a home invasion story presented in a non-linear fashion. What at first appears to be a story working on a common fear, especially now that so many of us are home constantly, slowly turns into something else, an attack on the soulless machine that, arguably, has exasperated the situation we’re all living through and that has callously allowed so many to die. That some characters in Hart’s story die violently from something other than the pandemic does not muddle the point; dead is dead, and people are profiting off those deaths. There’s a sense of rage underneath this story, and while it is, in many ways, a flipside to Iglesias’s piece, together they posit a sad yet undeniable point that, in America, at least, money, not human decency or compassion, is all that can keep you safe.

If you’re sensing a theme of class so far, it is absolutely there, and the use of this theme in several stories is a highpoint of “Lockdown”. Everyone who wrote a story for this acknowledges there are two worlds in a lockdown, the world of those who can stay home and protect their health because of economic stability, and the world where missing even a day of work could have a far more dire outcome than just illness. Steve Weddle and Angel Luis Colon offer stories speaking to these issues as well. In Weddle’s “At the End of the Neighborhood” an armed Homeowners Association from hell steps into the world of the fearful middleclass, examining how close some people are to becoming monsters based on fear and suspicion alone. Understated, and in some ways reminiscent of a plague-based retelling of “The Monsters are Due on Maple Street”, Weddle captures suburban ennui and boredom while the world rages and burns outside a cozy commuter community, unable to look away from what must surely come next. Colon’s story, “Your List” explores similar fears, this time set in a high-rise apartment block, where the confines of lockdown help shape you (the story is masterfully told in a breathless, ever escalating, second person) into a peak physical specimen, paranoid of catching the ravaging disease, until a random knock at the door explodes into intimate violence.

These stories, the stories where the pandemic is real, where characters are caught up in something that resembles what we see outside our own windows, make up many of the best stories in “Lockdown”, but not all. For an anthology featuring writers mostly known for their crime fiction, “Lockdown” doesn’t take long to start showing its interest in the speculative. Starting with Renee Asher Pickup’s “Desert Shit”, many of the stories imagine something much worse than what we’re living through, superbugs that have decimated society and left the survivors with a fearful half life that is quickly running out of time (for levity, it should be noted, in almost every superbug story, there’s a line about a certain orange skinned President dying, either offscreen, or by coughing out his lungs in the middle of a national address). In Pickup’s story, two criminals steal a pallet of bleach, then hide away, losing themselves in drugs and sex until, days later, they check their phones and see the world has gone to hell. Struggling to get across town, they travel the deadlands of a desert community where cops where full HAZMAT suits and have been ordered to shoot anyone outside of their homes.

Others, like Jen Conley’s “Fish Food”, examine what, exactly, an expectant mother would do in the face of a disease whose transmission almost always equals death. A slower, personal story, “Fish Food” stands out as amongst the best in the collection because of its impressive worldbuilding, its lived in pacing, and its willingness to look hard questions in the eye and give definitive answers. “Apocalypse Bronx” from Richie Narvaez similarly moves through a devastated world, this time through the eyes of a corrupt cop sent to kill a witness who has been offloaded from the hospital in order to allow staff to handle the spiking disease. A nighttime gauntlet through New York City, devastated by the second, mutated wave of COVID, Narvaez’s story is both entertaining and timely, and, with its well thought out descriptions of a second wave, one of the most unnerving to those of us reading in the present.

Others go even further, positing a world in which Ghosts, because of the lockdown, become lonely, where monsters gain free roam of the earth due to the decimation of disease, and where the United States has fallen, leaving only Mexican and South American drug cartels in control of most of North America. “Misery Loves Company” by Ann Dávila Cardinal tells a story of loneliness and betrayal, where a long-rumored ghost on a college campus becomes so upset with those who no longer fill the school’s halls, it starts haunting, and killing, faculty over Zoom calls. That sounds like an insane premise, a story that absolutely should not work. That it does, and that it works remarkably well, is a testimony to Cardinal’s talent. Similarly, S.A. Cosby’s “The Loyalty of Hungry Dogs” starts feeling like a scene from one of the great post-apocalyptic books in literature, Cormac McCarthy’s The Road, including the overgrown rural home of survivors and a mysterious but obviously Not-Good-News shed behind the house, and armed marauders willing to kill over the contents of a small garden, before becoming something altogether different. Half a continent away, V. Castro’s “Asylum” tells the story of how the Cartels came to power, defeating a particularly horrifying disease and watching the United States fall, in part because of their inhumanity at the border. Told conversationally, the story packs a complete speculative history, moving from individual stakes to the full ramifications of the geo-political rebalancing without ever forgetting those who died because of US policy.

Other standouts in “Lockdown” include Eryk Pruitt’s “Herd Immunity”, another second person story in which a young man visits a cult compound, “The Seagull & the Hog” in which a frustrated man loses his mind to the sounds of his neighbor’s constant copulation and undertakes what might be a suicide mission for new material to masturbate to, Hector Acosta’s “Por Si Adoso” which examines a food delivery racket, and the trouble poor kids trying to make cash for themselves in a new world find themselves in when they come in contact with the upper class, and “Lockdown” editor Nick Kolakowski’s “A Kinder World Stands Before Us” in which a former Michelin starred chef finds himself cooking for the world’s most vapid and useless collection of Tech CEOs, moguls, and ultra-wealthy before their source runs out and the 1% rapidly devolve into procuring other means for their own survival.

That an anthology edited by Steve Weddle and Nick Kolakowski has so many great stories shouldn’t be a surprise; Weddle edited Needle, one of the seminal crime fiction journals of recent years, and Kolakowski is fresh off a multi-year tenure helping shape young writers as an editor at the long running Shotgun Honey website. Unfortunately, however, not every story in “Lockdown” is excellent. A couple of stories seem out of place or rushed, or do not fit the broader theme of the anthology as a whole, including a couple of the later stories, one of which would be better described as post-apocalyptic sci-fi, which features almost no mention of a lockdown or viral outbreak at all, and certainly no thematic or plot relevance to the thematics of the wider anthology.

Though there are stumbles, none are so bad as to make “Lockdown: Stories of Crime, Terror, and Hope During a Pandemic” anything other than very, very, good. “Lockdown” is a varied, thoughtful, imaginative anthology that offers more than just crime or horror or sci-fi, but instead a mix of all of the above. Though not perfect, it is considerably better than most other anthologies and if it were not for being spread across so many genres, I would expect it to be nominated for several awards. Perfect not just for reading while in lockdown, but also, when this is all over, as a document of where we were at this moment, “Lockdown”, full of rage, sadness, and humor, excels at showing the humanity of everyone who may be or become infected, and casts a light on the systems that shrug indifferently at death. 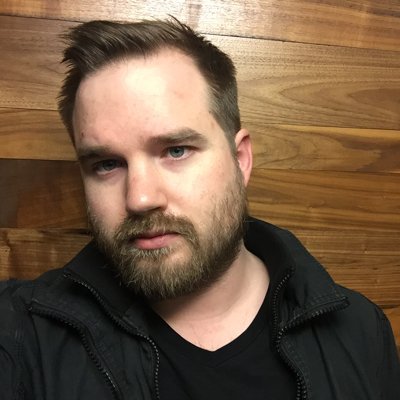 Paul J. Garth has been published in Thuglit, Needle: A Magazine of Noir, Plots with Guns, Crime Factory, Tough, and several other anthologies and web magazines. He lives and writes in Nebraska, where he lives with his family. An editor at Shotgun Honey, he is at work on his first novel, and can be found online by following @pauljgarth on Twitter.