Coming Out In the Wash, fiction by Tia Ja'nae

Ain’t nothing like throwing a crisp pair of dice on Chicago concrete.

Not everybody can have a perfect roll against the bitter winds coming off Lake Michigan, itchy trigger fingers from testosterone fuelled assholes illegally gambling away child support checks, and the occasional set of shaved dice. Good thing a chick like me giving lessons today for all the lames wanting to learn how to do it.

These plump, sweet pieces of acrylic cubes perched in between my fingertips arch their back on my point better than I do on a good piece in the sheets, do you hear me! I think I’ll name them Eddie Kendricks since they are responsible for the bread stacking up on the line becoming my intimate friend.

Eight is the point. Shooting a hundred. Letting it ride down the line.

After two hours of mean rolling on top of ducking the fuzz to get the pot up, I’m finally at the end of the line, which is exactly where I want to be. Time to double up, bring it on home, and send these cats off salty as hell with nothing but lint in their pockets. How I see it, better me than the tax exempt casino sporting their contributions to the kitty.

Catching my second wind now. No need to rush.

Shit talking getting real personal now for the cats running out of the long green, but it ain’t phasing me. Being the only chick out here in the den I’ve heard it all. I’ll be that bitch that’s in over her head taking the rent money. Or the cunt who ain’t got no business in the street with grown ass men copping their utility bill and car note payments. Mostly though, I’m the hoe sending the tricks home broke, baby!

At the end of the day like my granny used to say, you got to pay to play.

I’m smiling like a kid in the candy store when the pit boss gives the green light to place the next round of bets. A couple grand starts spreading out across old piss and rat shit around the field wider than a whore’s legs at a church picnic. Cats out here perpetrating hard, fanning paper like they waiting on the church collection plate knowing damn well it’s the last of their cash before they hit the bricks broke.

Side action got them stretched thin, even if it is doing better than the point. They ain’t slick, though. Every shooter knows that’s where the heavy bread lottery is at right before you lose everything and have to take your number out. I’ll cover the bets just for a little extra padding for what I got coming on the line. Play the field long and strong but side bets pay every time.

Cash like that in the air surely will make its way to the fuzz’s nostrils. Can’t stand them bastards stalking our action on the blue light cameras, waiting for a big enough take to shake us down and tax us on our paper. Lookout up the block says the rollers are rotating the perimeter. Time to bring home the bacon.

Last throw of the game. I’m riding it all. One more eight and I’m straight.

It’s so quiet you can hear the roaches taking a leak. My hand parlays in perfect motion, until this bumblefuck betting against the point elbows me in the side, knocking me down. Dice drop out my hand like paperweights, hard against the bottom of the garbage cans. Seven. Crapped out.

All hell breaks loose. Screaming, hollering, pushing, and shoving to stop Elbow and his sidekick from snatch and grabbing our hard-earned paper.

Let the motherfucking cheaters say what they want, but I’m going to shoot this shit again. Hand me the dice, don’t touch nothing on the line, and let’s get on with it I say. If I had of thrown a legitimate seven and crapped out, that’s one thing. Some big corn fed husky, Lenny from Of Mice and Men bastard trying to mow me over looking for George is another.

Everybody seen it too. All the regulars know the deal, and in agreement on a do-over. Elbow and his sidekick got other ideas, running off at the mouth like they are the moral authority on the matter. Both of them got one hell of a nerve copping my dice like they didn’t have to buy them from out my grip first. No ma’am! We do not do that in this alley!

This ain’t my first walk around the park. Cats get in their feelings when chicks like me come down the stretch and school them on what they think is only a man’s game. Comes with the territory. But this ain’t romper room shit out here. Either the transgressor rectifies the situation or the life they save will be their own. Regulars know better. Elbow and his sidekick about to find out the hard way.

Loud talking over the pit boss in a failed attempt to auction off the dice is strike one. Chauvinistic comments on bitches being in their place and beneath them is strike two. Blowing on the dice and inch from my face is the nail in the coffin on strike three. No more compromising; these fools are out the game.

The razor sharp Buck knife resting comfortably cool against my ankle found its way into my hand and carving Elbow up like a Thanksgiving turkey before he knew what to do with it. Talking shit to me without a piece in his hand, yeah okay. Cheating motherfucker will know better next time he gets out of pocket.

The other shooters back up and let me have the killing floor as soon as the sidekick tries to show me what he’s working with. Little fucker got nice hands; the sucker punch he clipped me with from behind ain’t nothing short of nice nastiness. Not dropping me was his flaw though; he underestimated my ability to bounce back and help him clear his throat by cutting his Adam’s apple out as a souvenir.

Snivelling little bitch yelled like a baby getting shots once he felt the cold sharp surface of old faithful slice slivers in his ulna and carve a rough path to his radius bone. It was the least I could do for the shiner he probably left on my face. Oh, well. At least the stray animals will have something to nibble on tonight.

The stench from those two pieces of shit bleeding out and soiling themselves into the bowels of death got all the shooters too uptight and in flight to finish the damn game. Some of them with weaker stomachs are tossing up cookies quicker than the ground can catch them. Punk asses. Talk a good game and bitch up in the clutch.

I can’t believe the minute I suggest we move Elbow and the sidekick to the garbage receptacles and get them out our way that the shooters freak out about murder and haul ass out. Jesus Christ, I ain’t a medical professional certified to make a clinical determination of death or nothing, but as long as the blood is seizing and the bodies are whimpering, they alive right? Am I right?

If the shooters want to act like that, cool; game is done and I’m taking the bread I got coming to me. If they too good to touch blood soaked cold hard cash, that’s their business. I ain’t squeamish in the least. Hope Elbow and his sidekick get a laugh thinking about me going home and doing woman’s work with the Woolite trying to wash their genetic material comes out in the wash.

I swear, we just can’t ever have a nice friendly game without company forgetting their table manners on rotation for the serious players enjoying the hustle. That, or bleeding out all over the money for the forensics team to find after they pay the price to cheat the dice. Back alley games ain’t got no chance of making ESPN Wide World Of Craps with all these non-competitive amateurs on the table.

Wishful thinking tells me to snatch the dice up as a keepsake for my trouble. Those pretty little rubies made me a lot of money today. Be a shame to lose them to the asphalt and grime like that. Problem is, only one of the snake eyes rests in Elbow’s hand; the other one has rolled away to parts unknown.

Elbow better be thankful sirens are blaring in the distance or else I’d cut the son of a bitch up again for breaking up the set before the fuzz get hip! I’m taking the one die though; half a great set is better than having no memento at all.

The crap game is a bitch, but it’ll be all better tomorrow. 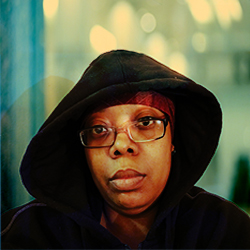 Tia Ja’nae is a creative writer and master propagandist. A proud Trekkie, her writing engages, boldly going where few have gone before. Her work has been featured in Shotgun Honey, 365 Worlds, and Flashback Fiction; Her more serious, satirical journalist work has been featured on Humor Outcasts; check out her satire under her pseudonym on www.articulatemadness.com, which could be classified by order of your government.
Posted by Rusty Barnes at 1:02 PM No comments: