The Myth of the Centaur, fiction by E.A. Aymar

Tom Davidson locked the door to his home office and headed upstairs to join his family for dinner. His wife Ruth and their two daughters were sitting at the dining room table. Three men he’d never seen stood behind them, wearing masks.

One of the men held a gun. That man wore a horsehead mask.

The other two held long knives. They were disguised as American presidents, Ronald Reagan and Bill Clinton.

Everyone in the room turned toward Tom.

The man in the horse mask pointed with his gun to the empty chair at the head of the table.

But Tom was rooted to the floor, fear gnawing him like he was a crumbling statue.

“Is that my mask?” Tom managed to ask, and then he remembered he’d actually left his own horsehead mask on the floor in the office, moments earlier. His wife, Ruth, gave Tom a confused look.

Tom couldn’t remember the exact moment that the copious amount of online pornography he watched began to bore him, but he could absolutely remember the moment it excited him again – it was when he started watching while wearing a rubber horsehead mask. Something about locking the door to his basement office, slipping the mask on, and adjusting it so he could peer through the nostrils gave him an exciting rush, like the sensation of a first teenaged kiss, or suddenly leaping into the air and realizing he could fly.

The mask itself had been a surprise, forgotten by some neighbor at their house after a Halloween party and discarded to his office. Tom had ignored it until one day, out of boredom, he put it on and saw himself in the mirror. And what he saw moved him.

Gone was the slumped, pudgy body of a fifty-year-old most people would correctly assume worked in insurance. Tom looked at himself and saw a mythical beast staring back. The horsehead, with its wild eyes and open mouth, looked to be in mid-gallop, perhaps rearing on hind legs. Tom had slowly unbuttoned his shirt, slid it off. Undid his pants and let them drop to the floor. His hands felt like he was holding lightning.

After that experience, it was as if pornography and the mask possessed Tom. He thought about both obsessively at work, missed family meals, took days off to spend online. Once, he shared his interest with Ruth. They gamely sat next to each other, naked in his office while he brought up a video, wondering if he should pull out the mask from the closet. But a minute into the video, Ruth asked, “Is that really what you like?” And despite the smile on her face, Tom sensed her strain.

After that, he stopped involving his wife.

Two years later, Tom couldn’t remember what that video had been, but he knew it was certainly tamer than what he watched now. His obsession had refused to rest, and what he watched had turned darker, disturbing, occasionally distressing.

But he couldn’t stop looking.

“Dad,” his daughter Katelyn said, a knife at her throat. “Please.”

Tom came back to the present, hurried to the empty chair at the head of the table.

The office, he remembered, that he wanted to return to after dinner. The office he planned to stay in until the girls went out and Ruth went to bed. The office where he wanted to slip his sweaty mask back on.

And the office where he hadn’t turned off the pornographic images on his computer.

“There’s not much in the safe,” Tom said, truthfully, trying to steer the men in a different direction. “We don’t have a lot of money.”

“We’ll take whatever you have,” Clinton said.

“What did you mean,” the man with the gun and horse mask put in, “about this being your mask?”

“Yeah?” That from his wife.

“I really don’t want to get into this now,” Tom said, worried. “Can you guys just please leave? You can have everything in my wallet. I’ll even drive you to an ATM.”

Tom cast desperately about. “What about my wife’s wedding ring? Would you take that? It’s the most expensive thing we own. You wouldn’t even need to go to the safe.”

“You can have mine too,” Tom said, twisting off his ring. “But hers is worth more. Mine’s just a fake gold band.”

“Listen to him,” one of the men said. “Trying to distract us.”

“The mask is something you wear?” Clinton asked, and he pressed the knife against Katelyn’s throat. “Why?”

She squeezed her eyes closed.

“Ew,” his daughter Monica said. Monica was his older daughter, and she was breezing through her teenage years with a confidence Tom had never understood but admired. “Dad, gross.”

“You got, like, a horse thing?” Reagan asked. “Like, you jack off to the movie Seabiscuit or some shit?”

“I mean,” horse mask said, “I want to hear more about this, Seabiscuit.”

“I don’t,” Katelyn put in, even with the knife shining against her throat, and she also added a, “Ew.”

She’s such a bitch, Tom automatically thought, and the thought deeply shamed him. His own daughter, her life at risk, knife at her neck, and he’d thought of her as a bitch. Yes, Katelyn had issues with authority and, yes, she often was a bitch and, yes, with her shitty grades and constant trouble she was no Monica, but what kind of father would think that at a time like this?

The man with the knife against Katelyn’s throat moved it away.

“You wear a mask like this when you’re strangling your cyclops?” the man with the horse mask and gun asked. “What are you even watching?”

“Please,” Tom said. “I really don’t want to talk about this. Can’t you just take our stuff?”

“Hey Seabiscuit,” the man replied, “tell us everything, or we’ll kill all of you.”

At that, the world inside Tom dropped. He started to speak but couldn’t. At his pause, horse mask laughed loudly. “Really?” he shouted. “You won’t say anything, even with…”

He laughed so hard he bent over, hands on his knees.

And faster than Tom realized she could move, Ruth turned and grabbed his gun. The man cursed. They struggled.

The gun went off, a deafening sound, like a shout from a god.

The man slumped to the floor, the wall behind him red.

Tom could see the damage to his head, his mask and head like the right half had been smashed by a hammer, one rubber horse eye dangling down.

Ruth pointed the gun at the men with the knives, fear and anger on her face like war paint.

“Monica,” Ruth said to their older daughter, her voice shaky but determined. “Call 9-1-1.”

Years later, Monica would, without a sense of irony, go into veterinary medicine and end up running a successful, quiet practice. Both Tom and Ruth were proud of her and kept in touch with Monica after their divorce, Ruth more frequently than Tom.

Katelyn didn’t have as successful a path. She couldn’t shake off the home invasion like her sister had. The trauma from the knife against her throat, and the sight of the dead man sprawled against the wall, haunted her. Panic and anxiety had always overwhelmed her, but the emotions grew stronger as Katelyn grew older, the twin emotions like two hands dragging her to hell. And she was desperate for an escape.

Two years after her divorce from Tom, Ruth remarried a police officer. Not one of the police officers that came by that night, but a neighbor in her apartment building after she left Tom. This police officer was also divorced. They never discussed their pasts.

They didn’t talk much about their present, either. When Katelyn died from a drug overdose, Ruth grieved with Monica, not her husband. With her new husband, Ruth kept her suffering private. And she was proud of herself that she did.

As for Tom, he ended up living in a small apartment in a different town. He never remarried or even dated much. The night Katelyn overdosed, Tom was online in a corner of his apartment, wearing the horsehead mask and nothing else in front of a web camera, asking people what they wanted him to do.

Desperately giving them whatever they desired while the phone rang. 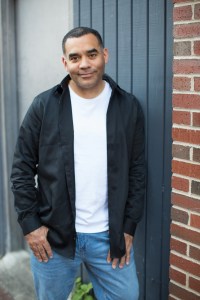 He has a monthly column in the Washington Independent Review of Books and is an active member of Crime Writers of Color, ITW, MWA, and SinC. He also runs the D.C. Noir at the Bar series and has hosted and spoken at a variety of crime fiction, writing, and publishing events nationwide.
Posted by Rusty Barnes at 8:56 PM No comments: