It was a miracle. God sent His angels down to align the flipped Honda just so that the fence post pierced it in the driver’s side door but punctured through right at my lap, making a kind of safety restraint for the next two flips instead of skewering me as it should have. The days spoilt in Sunday school credited me this. Russell, thrown from the car, must have bounced softly against the angels rescuing me because he bent over to gaze scratch-less at me hanging upside down.

Russell rent the door open, and a shuddering went through me as the fence post slid over my thighs, the tip grazing my belly as it curved out its retreating arc.

“So you ain’t even hurt?” I asked Russell.

“Not my first one of these.”

“I didn’t know car wrecks was one of those things you get better at with practice.”

“Everything gets better with practice.”

I hopped a little with my feet too newly used to the feel of the ground. I thought maybe the old truck over on the road had stopped to help us until I realized it crackled and leaked and remembered that it was the truck I had hit right before we flipped. We’d decided to drive windows down through some of the backwoods counties on the border of North and South Carolina—I might’ve been speeding. The truck’s driver’s side was busted up pretty good. The window had shattered in on the man who struggled with the crushed door and steering wheel that were all up in him.

“We did already,” Russell said. I was sure we hadn’t. Russell had a poison in him, so did I, but only the kind I put into myself, where his was there all the time, a poison he produced.

“You came out of nowhere,” the man said.

“We came out of Sumerville,” I said.

“You were flying. You drive like mad sons of bitches. If not, I would’ve had plenty of time to pull out.”

“What is that road?” Russell asked.

“Long ass driveway. How much land you got there?”

“Over a hundred acres. I need help, boys.”

“What’s your name?” Russell asked. “So we can tell the police.”

“Melvin. Shit, you boys are on something, aren’t you?”

“Goddamn it,” Melvin said. “I’m hurt.” He had stopped trying to get loose.

We all went quiet then out of respect or forgetting our lines. Or maybe I sat down. Or I went back over to the car to pee so it wouldn’t bother Melvin. I do remember that the radio was still on in the car to a talk show and the man kept using the word “irradiation.”

When I got back or I stood up or I started paying attention again, Melvin was saying, “My parents, they died in a wreck.”

“Their boy dying that way.” Melvin coughed up wet. “Their boy.”

“Their only boy?” Russell asked.

“Their only boy,” Melvin confirmed. “Where is that ambulance?”

“It’ll be along directly.”

“You live over there all alone?”

He nodded a cough.

“Want us to call your other family?”

“Got none. Their only boy. I haven’t made them any grandkids.”

“That’s all for the better,” Russell said. “Jesus told us to leave off with family. You didn’t see him making any more of us. It’s God’s desire that we just stop.”

“Is that a siren?” Melvin asked. There was no siren.

I had the thought that we would leave or should leave, but Russell said we should stick around like Samaritans. And I ain’t proud, but I got a bit bored.

“Why you didn’t have any kid?” I asked him to pass the time.

He stared up as if my voice had come from on high instead of right next to him. “I had it too easy. If that makes sense.” He coughed some then but went on and recovered. “Too easy to do what I wanted to do. So I did that.”

“Know exactly what you mean,” Russell said, though I wouldn’t have called his life easy.

“I should have made them grandkids.”

“Did you have room for them?” Russell asked. “Big house back there? Well off the road?”

“This road don’t get much traffic, does it?” I asked.

“Hell, they got condos in Sumerville now.”

Melvin kept talking and begging and questioning and doubting and generally living till Russell pinched his nose and sealed his mouth with the palm of his hand. Melvin struggled some but gave in pretty quickly. At least I think so.

Russell had me help him push the pickup back up the driveway. It was hard too, with one of the tires rubbing against something, no matter how we bent the metal bunched there. Took us most of the day, but we had it well up the drive and away from the road. It felt good to work like that, the pressure in the muscles, the exertion. And where we stopped was a hill from which you could see Melvin’s acres, pastures left to grow and woods bounding the abandoned fields.

We walked all over that land. Explorers. There was a pond brown and near empty that squirmed with the fish that were doomed there. There was a shitload of trees, big ones with bunches of mistletoe and gnarled lumps like cancers on their limbs and trunks. There was a creek dried from the tearless sky. It was there that we found a huge rock that had been worked on, chiseled with compartments and troughs and spouts.

“Who you think done this?” I asked.

“Prehistoric peoples,” Russell said, but it sounded better when he said it. “That’s what we are.” He took his clothes off, which wasn’t that unusual. He was a surprisingly small man but without shame. “No. We’re posthistoric people. They were the first, and we will be the last.”

I always thought Russell should have been a preacher, but he said it didn’t matter because he didn’t pay tax no ways.

I know you probably want to know what we did with the truck, with the man who had it too easy, with our own car crashed. But all honesty, I can’t recall. It must have resolved itself all alright. Memory’s a real nightmare that way, the things you do and the things you don’t. I have to hold a line sometimes, else I’ll tumble making assumptions about them things I don’t remember based on the things that I do.

Russell just took over Melvin’s land. He squatted in an outbuilding for months. At some point he moved on into the house, and the structure went feral like its inhabitant. The gutters drooped and some of the ends fell to the ground with other end still attached, as if the house were trying to use them to hold itself up. The mail that continued to come, like a meaningless promise, clogged the front hall where Russell discarded it once shucked seeking checks. The electricity went off, and the water followed suit.

I went out there regularly to help. I had watched my uncles build houses, so how hard could it be? Saws and thick red and black pencils and nails held in the mouth like chew and the dusted knees of men who knell. But no matter our intentions, the place grew dilapidated, and its disrepair deepened like the blackening spots on apples.

And inevitably when I’d visit, we would lose days. Russell could talk, and he could talk me into all manner of wickedness, but I can’t claim unwilling. These were the days I was waging a war on myself, my body the battlefield for some stupid skirmish between my vanity and the world that wouldn’t submit. I would ruin myself out spite before they could say I had tried and had not been enough. Russell gave me enough. But eventually, I would fight my way through a line of giants shining in the light of a flaming sword to find myself in a gas station eating Moon Pies one after another letting the wrappers fall on the floor. No one ever made me feel like myself like he did until I met you.

When I tell you this, I am three years sober. I am holding your hand because you have just told me that our baby still baking is a boy. I can’t stop confessing all my happy sins those nights and days when everything, even the pain, especially the pain, caused me a kind of religious joy. I keep confessing long since you have stopped returning the pressure of my grip, the fingers of your other hand pulled tight with the palm covering your bellybutton. Let’s consider the name “Melvin” is all I ask. 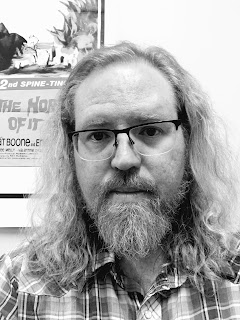 S. Craig Renfroe Jr. is the author of the short story collection You Should Get That Looked At (Main Street Rag Publishing Company). Currently, he is an associate professor at Queens University of Charlotte. Also, his work has appeared in Cemetery Dance, Puerto del Sol, McSweeney’s Internet Tendency, PANK, Hobart, Barrelhouse, and elsewhere. You can follow him on Twitter @SCraigRenfroeJr.
Posted by Rusty Barnes at 2:56 PM