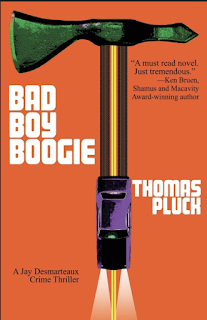 If dark crime thrillers of persecution, personal justice, and payback are your thing, Thomas Pluck’s Bad Boy Boogie has them all, and more in this wild story of an ex-con’s return to his small hometown. When Jay Desmarteax comes back to Nutley, New Jersey to restart his life after serving 25 years for killing ruthless high school bully, Joey Bello, he finds that his folks have disappeared, his old friends want him gone, and his enemies want him dead.

Nutley is a small town outside of Newark, and is also, in Jay’s words,“a place to grow up, rich or poor. Parks to roam, ponds and streams to fish in, a pizzeria in every neighborhood…but a little too proud, a little unfriendly to outsiders….”

It is a narrow-minded place with close-minded people; full of secrets, and layers of corruption simmering just beneath the calm and ordered surface. The cruel aspect of being an outsider carries a lifetime sentence from which you can never really recover. What is more unjust, his best friends who remained in Nutley, end up with the same small-town mentality. They see Jay as a reminder of a past they want to forget.

The town and its people did not want him when he was a kid, and is not happy to see him back from his stint in Rahway State prison. His taxi home is intercepted by the Chief of Police with this message. “You never belonged here. We’d like to go back to living like you never existed. You’re a stain we scrubbed out of the mattress.”

Although Jay knows he should drive south, start a new life, and pick up the trail of his adoptive parents, Mama Angeline and Papa Andre, the chief’s warning is anything but a deterrent. Jay has served his time, he is back, and he does not care what anyone thinks. “I just want to find my folks, but now I’m curious why everyone wants me gone so bad. Feel like I’m the only one who doesn’t know the punch line.”

In the true spirit of crime thrillers, when Jay Desmarteaux finds he is dealing with shady small-town politics, and a legal system that has become as corrupt as crime itself, he is unable to follow the advice of his old mentor, Okie Kinkaid: “the best revenge [is] living well”.

In returning to Nutley, Jay is rendered cynical by an unending cycle of violence and deceit. The rejection releases Jay’s tremendous grudge against the people and the town who left him to carry the entire blame for a crime he did not commit alone. Instead of retreat, Jay’s fight back begins with returning to his childhood home. Ultimately he is going to find his parents, but he wants answers first.

“Walking through his old house now inhabited by strangers felt like the impossible reality of a dream. The carpets replaced with polished hardwood, paneling torn out for bright pastel paint. Here and there the house he knew shined through...He padded upstairs to the master bedroom. (Papa) Andre had built a platform bed with a sunburst maple headboard, and the new owners either appreciated its massive beauty, or couldn’t be bothered dismantling it. Jay pressed the panel by the headboard. The wood eased in, then popped open to reveal a hideaway. Jay blinked at what lay inside the cubby. Two of the few things Jay had been forbidden to touch. The tomahawk Andre had taken home from Vietnam, and the combat knife with the finger grooves cut in the handle... Jay hefted the Lagana war hatchet’s worn hickory handle with reverence, his reflection warped in the hand-hammered blade, the edge scratched from field sharpening. A worm turned in his stomach, as if he could smell his parents’ fear. They had left everything…. He gripped its smooth wooden handle like he was squeezing Papa Andre’s hand.”

What Jay is really seeking is revenge. An antihero with a rough and jaded attitude, he has been used, terribly abused, abandoned, scapegoated, and cast aside. He was handed a life sentence for murder, and lost 25 years because his friends remained silent at his trial, all for “Joey Bello, a no-good rapist son of a bitch who needed killing.”

Pluck’s smooth writing style cuts to the bone, and he has created in Jay Desmarteaux a larger than life, a saw-toothed, scored-earth, sometimes humorous, sometimes lewd defender of street justice accountability. When a friend tries to talk him of taking revenge with reminding Jay that “you can’t fight those kind of people. It’s like banging your head against the wall. Only feels good when you stop.” Jay’s response is, ‘I got a pretty hard head’… and rapped his knuckles on his skull.”

Bad Boy Boogie deals with dark and disturbing matters, but it carries an equally satisfying amount of justice, because stories of revenge are fulfilling. The impulse to strike back against corruption and cruelty is wired deep-we can’t help but glorify an avenger who answers brutality with Jay’s level of ferocity, especially on issues of child abuse. His retribution is swift and thorough, and feels valid. Pluck’s tough-guy action is balanced with unexpected humor.

“‘They fixin’ to kill me Chrissie?’ The tremble in his eyes said enough. Jay threw his body into a liver punch, follow it by two more. Chris dry-heaved, face bent to the steering wheel. Jay stomped the accelerator and jerked the wheel toward the Benz. Oscar and Paul snapped their heads up as the truck veered their way. Paul waddled like Costello…Oscar did a funny little dance, stuck in place until the truck crumpled the Benz like tinfoil and punched it and him into the waves.”

Jay’s non-linear back story provides glimpses of his childhood that give disturbing insights into what has driven Jay to this high-octane level of retribution.“The taut clothesline ran from his swollen purple ankle to the leg of the sofa. The boy huddled under the sofa’s stained yellow arm. There he didn’t have to look at her. He dug at the knot with the carrot peeler. Crusted with blood. He had to get free before the Gator man came. Water dripped in the sink and tortured his dry throat. There was a warm glass of flat Coke on the other side of the sofa but he couldn’t reach. Not without crawling on top of the Witch.”

Bad Boy Boogie’s title is a tribute to the band AC/DC. “Back in Black”, “Problem Child”, “Live Wire”, “TNT”, and “Highway to Hell” title each section. In a guest post for Pulp Curry, Pluck wrote, “My favorite AC/DC songs work like noir tales.” And like the band’s lyrics, Bad Boy Boogie is on point; humorous, rowdy, loaded with working-class antagonism and pride. Pluck employs the same raw ideology in his story as AC/DC applies to their music.

This is not the last we will see of Jay Desmarteaux. Jay gets around. Pluck calls him “the walking Cajun shitstorm” who has appeared in several short stories, and will return in a follow-up novel where he will search rural Louisiana for his parents. 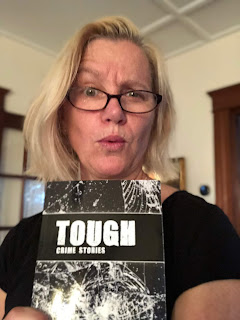 E.F. Sweetman is a writer living in Beverly, Massachusetts. Her stories have appeared in Microchondria, FunDead's horror anthology, and Switchblade Magazine, as well as upcoming issues of Broadswords and Blasters, and Econo Clash Review. She reviews noir, crime and thriller novels for both TOUGH and SPINE. Follow her on Twitter @EFSweetman.
Posted by Rusty Barnes at 1:30 PM