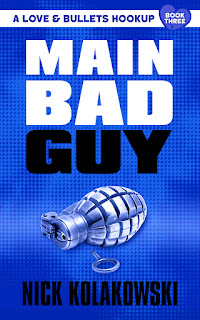 Bill and Fiona, the con-man and assassin couple at the wild heart of Nick Kolakowski’s Main Bad Guy (the frantic third book of his Love & Bullets Hookup series) have their backs against the proverbial cliff. If the Rockway Mob they double-crossed doesn’t kill them, all that stands in the way of financial liberation is eluding everyone trying to capture the heroes and their escape fund.

In the first book of the series, A Brutal Bunch of Heartbroken Saps, Bill puts these events into motion when he runs off with a large sum of the mob’s money, and the Dean, their boss, puts a bounty on his head. The Dean dispatches multiple assassins to track him down, among them, Fiona, jilted by his disappearance and prepared to bring his head back to New York: the box, dry ice, and hacksaw ready. Bill, an expert in manipulating people and computer systems before his involvement with the mob, sticks to mostly small-time insurance scams, info hacks, and a little bookmaking on the side but a chance encounter with an older, suicidal con-man makes him reevaluate his life’s pursuits and act on his one-time fantasy escape plan. What makes him easy for Fiona to locate, other than the tracker placed in his favorite pair of boots, is recalling Bill’s extensive answer to a rhetorical question. She comes to his rescue; then things veer into a finale echoing the Wild Bunch and True Romance complete with a hitman channeling his inner Elvis.

Book two, Slaughterhouse Blues, finds our protagonists licking their wounds south of the border and beginning life in hiding. It doesn’t take long for the Dean to locate them, send two hitmen, and again Bill and Fiona go on the run, this time with one of their betrayers in tow, to help them dig up Nazi gold hidden in an old New York bar. It’s quick fun, that channels The Good, The Bad, and The Ugly.

Installment three, Main Bad Guy, begins with Fiona and Bill en route to the airport, without a moment to catch their breaths, when an unknown attacker blindsides their cab. Kolakowski doesn’t shy away from showing the physical toll life on the lam takes on our heroes.

“Bill’s cheekbones had swollen so much, he feared looking at himself in the mirror. He felt an absurd jealousy for action-movie heroes who could emerge from a pummeling with only a photogenic cut or two on their brow. In real life, skin behaved like ripe fruit when you hit it.”

After tending to their more urgent wounds, Bill and Fiona stumble upon luxury condos in mid-construction and decide to lay low and rest in one of the completed units. This innocuous decision proves fortuitous for the Rockway mob because it turns out they own the building.

The only hitch in the mob’s luck: Fiona and Bill access the penthouse panic room before their mercenary security team can corner them. With nowhere left to run, the Dean and his goons lay siege to their plans of escape, setting the stage for a long-brewing showdown.

Of all the heightened cinematic influences that bleed into Kolakowski’s Love & Bullets trilogy, Butch Cassidy and the Sundance Kid regularly come to mind. Desperadoes, fugitives perpetually on the run, and smartasses, Fiona and Bill likewise find themselves surrounded by people who want them dead at every turn while the good life calls to them from a distant land. Fiona and Bill’s relationship is the one element of the book where doubts linger. If love were measured in bruises and blood loss alone, it would be a tale for the ages. Early on it’s hard to see what draws them together. Fiona watches him hustle bar patrons until he tries his smooth charms on her and she offers him a job.

For someone who vouched to mobsters on the behalf of her thief boyfriend, Fiona’s flippant acceptance of Bill's dishonesty, even while predictable, is unclear why they want to go through all these obstacles to get a fresh start together. Maybe, like Fiona’s father Walker, who emerges from tough guy retirement to lend a hand, my skepticism is rooted in my affection for Fiona: she can do better than this doughy sweet talker. It’s difficult to imagine her and Bill in a less externally conflicted life together, without adrenalin and anxiety fueling their every move. At least Butch had a simpatico partner in Sundance, even when pinned down on the narrow face of a cliff with only water below, he was willing to risk the uncertainty of Butch’s escape plan. Even if he couldn’t swim. It’s hard to know if Bill and Fiona are as equipped to deal with the downtime of a straight life. The risks of settling down in a stable relationship together could be what finally kills them.

On the precipice of change, most of us barely notice as we straddle familiarity and the unrealized potential ahead of us. Change is fertile ground for cliché ridden aphorisms. From its opening scene to fiery final confrontation, Main Bad Guy is an inevitable conclusion to a madcap trilogy. As much as Kolakowski owes a debt to his cinematic influences, he crafts a high-action thriller, with a flair for the absurd.